I had an occasion to visit this temple today. It is about 20 kms from Chennai towards Chengalpet. The temple is around 500 years old
How to reach:
When you cross Maraimalai nagar look out for Mahindra city on the left. Just opposite this is the road to Chettypunyam . The road has granite arches of a construction company so it is easy to identify. The journey in this road for about a KM brings you to the railway track and a manned level crossing. Next you will find a placid lake on the right. After the lake proceed straight into the village (and not to the left which takes you to the Palar river bed). The journey from GST road is around 2 kms. There are autos available at the GST road . Inside the village the road comes meandering to a dead end and a left turn here takes you to the temple

Legend of the temple:
The temple is actually originally Varadaraja swamy temple. In 1848 The idols of Yoga hayagreevar and Devanathaswamy were brought here from Thiruvendhipuram near Cuddalore to protect them from alien invasion
(In Thiruvendhipuram, Vedanta Desika recited the Garuda Mantra taught to him by his uncle, Kidambi Appular and was initiated into the worship of Hayagriva by Garuda. Desika composed the Hayagriva Stotram in 33 verses. Apart from the `phalasruti' there are 32 verses. There is a reason for Desika writing the Stotram in 32 verses. The Brahma vidyas are 32 in number. His composing the Hayagriva Stotram in 32 verses is to show that Hayagriva is the repository of all vidyas. Desika says the neighs of Hayagriva are the essence of the Rig, Yajur and Sama Vedas. The 32nd verse which is the `dhyana sloka,' speaks of Hayagriva's right lower hand as `vyakhyamudra' - the elucidating pose and the left lower hand holds a book. Desika says that Saraswati, Dakshinamurthy and sages like Vyasa reflect a fraction of Lord Hayagriva's effulgence) .

So the temple is referred to as all three names. the Moolavar is Varadarajaswamy, Utsavar is Devanathaswamy and Yoga hayagreevar is the main attraction here especially to parents of school children you can find roll numbers scribbled on the wall inspite of advice to to the contrary by the authorities!! 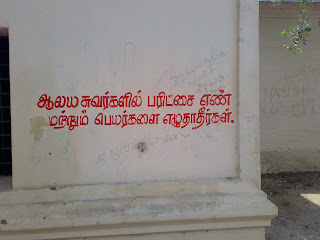 Hayagreeva avataram of Sri Vishnu is not one of the dashavatarams but is ancient than that. Two asuras Madhu and Kaitapha stole the Vedas and hid them Vishnu as hayagreeva retrieved them and preached them to Saraswathy and Brahma making them the custodians hence hayagreevar is looked upon as the fountain head of the Vedas.
As you enter you can see Sri Rama's shrine on the right hand side . The vigrahas here are exquisite 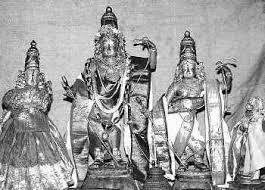 (pics of the utsava murthies from the net)
The idols of Sri Rama, Sita, Lakshmana and Hanuman were brought to Vandalur in Chennai, in the year 1868, on Oct 5, by Mudumbai Ramaswamy Iyengar, from the Tanjore Palace. When Ramaswamy Iyengar migrated to Bangalore, he had all these Gods installed in the Devanathaswamy Temple, since Chettipunniyam, was his native village. It has to be mentioned here that the first Mysore Dewan Veeravalli Rangachar (1831-1883) also hailed from this village.
It may be mentioned that the other beautiful images of Rama, Sita, Lakshmana and Anjaneya at Vaduvur were also unearthed at Thalainayar during the rule of Serfoji. He later enshrined them in the temple at Vaduvur. `Sita Kalyanamu,' a work in Telugu and Sanskrit, composed in praise of Lord Rama at Chettipunnyam by Shahji Maharaj of the Serfoji dynasty is said to be preserved in the Saraswathi Mahal Library at Thanjavur.

﻿﻿﻿﻿﻿﻿﻿﻿﻿﻿
Dwajasthambha is made of stone here on which Sri Garuda is seen facing the Lord, towards the sanctum. 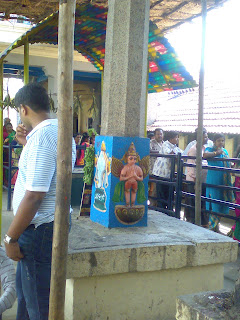 There is a practice of lighting lamps for prayers and you can buy them inside     Rs.2/ per lamp.and light them in the enclosure on the left as seen in the photo above.The area being recently covered gave god respite from the burning sun.There is also a counter selling water and prasadam puliyodharai, murukku and laddus, thengoyals all yummy to look at.﻿﻿﻿﻿﻿﻿﻿ There was a small queue when I went inside and it took a claustrophobic 20 mins to get to the sannidhiwhich was thankfully air conditioned and pleasant. The archakar was patient and lot of people gave books ,pens, pencils to be blessed and returned for success.They are all sold in a small shop outside the temple!!
The yoga hayagreevar is a short idol . He is in yoga Nidhra hence not accompanied by Mahalakshmi.
jnAna-Ananda-mayam devam
nirmala-sphaTikAkRtim
AdhAram sarvavidyAnAm
hayagrIvam upAsmahe!
(This verse is originally from the Pancaratra Agamas but is now popularly prefixed to the Hayagriva Stotram of the 13th century poet-philosopher Vedanta Desika. It is very popular among devotees of Hayagriva)

The devanatha swamy and devis are next to this lord and behind them is the idol of Varadaraja  found along with his two consorts Sri Devi and Bhoo Devi. There is a separate shrine for Goddess Hemambuja Nayaki even before you come to the main sanctum.( Correspondingly there is andal sannidhi on the other side seen through a mirror as the gates are locked). . The Urchavar of this temple is Sri Devanatha Perumal. Sri Devanatha Perumal is seen here with Prayoga Chakra on His right hand, which is a rare sight. 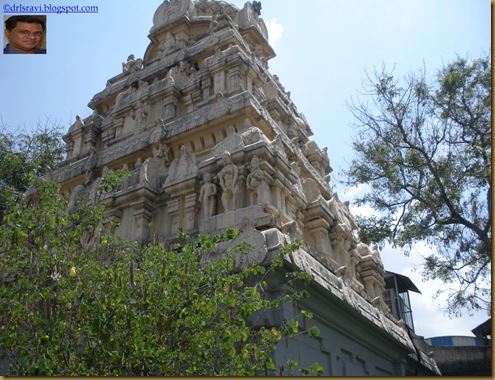 View from the South side 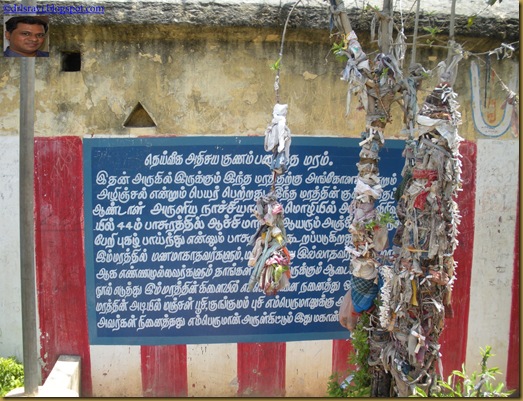 The Sthala vruksham Azhinjal tree and legend
Temple is open from 7AM to 12 noon and 4PM to 8 PM.
For more information visit the
link .http://sriyogahayagriva.blogspot.com/