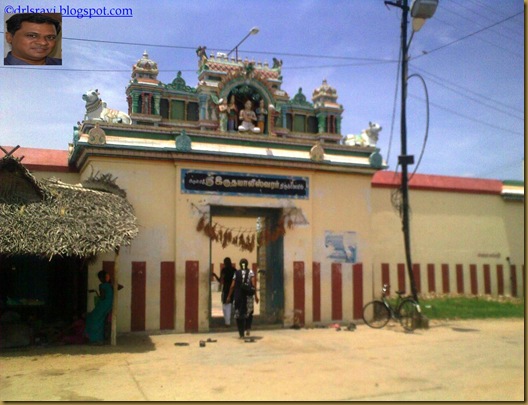 Legend:
The story of this temple dates back to 7th century during Pallava reign. There was a Shiva devotee living in this place during 7th century called Poosalaar. who had a desire  to build a temple for Lord Shiva at this place unfortunately he could not find funds for the same. Poosalaar finally decided to build a temple for the Lord by himself, As he was well read and knew all the Aagama Vidhis and nuances to build a temple, he wanted to start building the temple.in his mind
He sat under a tree called Iluppai and started meditating. He planned each and every small detail to perfection for the construction of this  temple in his mind itself. He also marked an auspicious day to commence the holy work. The temple work progressed in his mind.  He built the temple step by step. He had designed evebything in his mind right from Vimana, Sanctum, Temple Pond, Compound walls etc., and executed each in detail as per what he had in mind.
After the temple construction work came to a finish. He even had organised all the utensils required for the temple. Finally, he also fixed an auspicious date for Kumbhabishekam (consecration) of the temple. He prayed to Lord Shiva to be present for the consecration and offer His blessings.
During the same period, a Pallava king called Rajasimha  was ruling this part, with his capital as Kaanchi (today’s Kanchipuram). He also was a sincere devotee of Lord Shiva and was building a huge beautiful temple for the Lord, at Kaanchi. He  named the God as Kailasanathar and the temple as Rajasimmeswaram. The king was too proud to see the grandeur of the temple constructed by him.
The king also marked a date for consecration, while the finishing touches were going on at the temple. Lord Shiva appeared in his dream and told him that He cannot make it to the consecration of the king’s temple on the said date and asked him to change the day of consecration, as He had to be present for consecration of another temple built by Poosalaar of Thiruninravur.
The king woke up shocked . He wanted to know about the temple which God informed him of. He immediately started with his queen, ministers  to see Poosalaar’s temple at Thiruninravur.
He came to Thiruninravur the next day and enquired with many people about a new Shiva temple built by Poosalaar. Nobody knew anything about the temple but directed the king to the place where Poosalaar was meditating under the Iluppai tree.
King went and asked Poosalaar himself about the temple. Poosalaar, on hearing the king explaining about his dream, was overwhelmed to realize the mercy shown to him by Lord Shiva. Poosalaar explained to the king that he had been constructing the temple in his heart (Manasu in Thamizh) and had fixed a date for consecration.
Poosalaar made the king to look at his heart and realize the temple which he constructed. King was able to see and realize the temple made by Poosalaar.
Knowing this Rajasimma was amazed to see the devotion and sincerity of Poosalaar. The king himself took all the specifications of the temple which Poosalaar had in mind and physically constructed a temple for the Lord here. This temple is also called Manakkoil.As Poosalaar originally built the temple for the Lord in his Hridayam, the Lord here is known as Hridhayaaleeswarar. 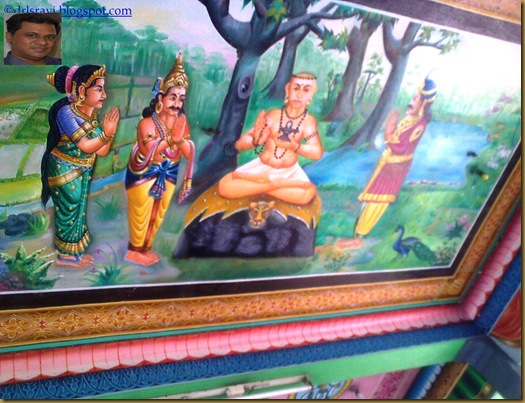 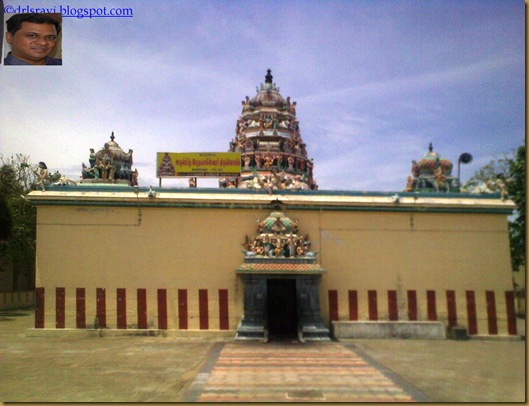 The main sanctum has an east facing Sivalingam with entrance from the south side. There is an image of Poosalar worshipping the Sivalingam inside the main sannidhi.
The Maragadambigai sannidhi faces south and has a petite amman in standing posture. The sanctum has a gaja prushti vimanam with Lingothbhavar, Brahma Dakshinamurthy and Durga in various niches.The entire complex is tastefully covered allowing for natural sunlight to illuminate these gods without the harshness of scorching sun!!. 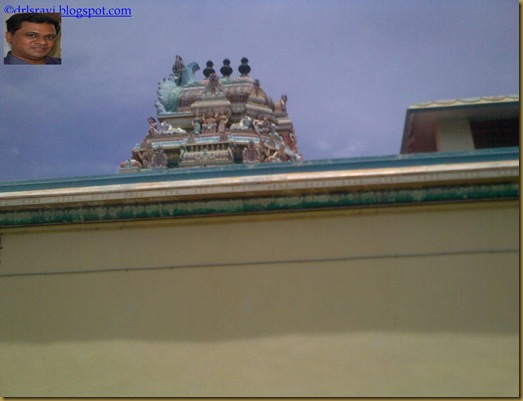 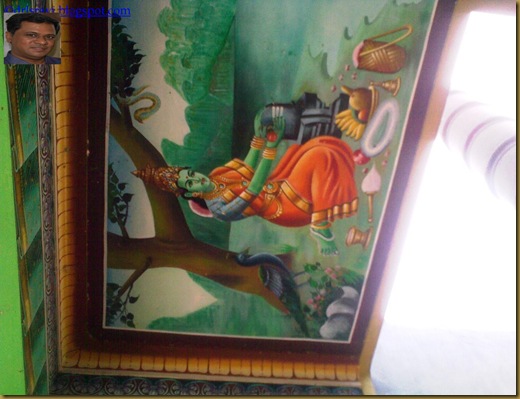 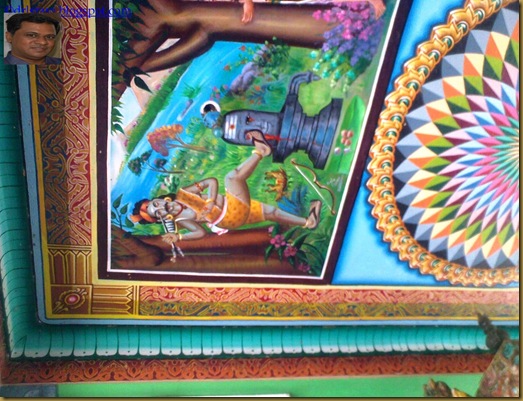 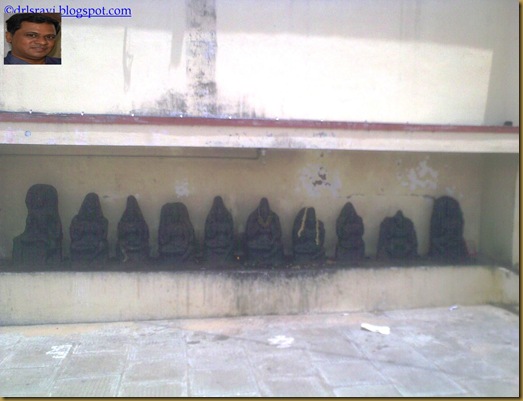 (Various figures on the right side of the main entrance)
There is also a statue of King Rajasimmam in the main complex.
ref:poosalar
Posted by drlsravi at 4:01 PM 1 comment:

This is the 55 th divyadesam of Vaishnava temples in India and is situated close to the Hrudayaleshwara siva temple in Thiruninravur.
How to reach:
Thiruninravur  is situated in Thiruvallur District and is about 35 kms Northwest of Chennai. On the road from Chennai to Thiruvallur,( the MTH road or chennai anantapur road) proceed west from padi  till you cross Pattabiram .When you reach Tiruninravur  you see the over bridge  across the railway rack take a right turn and climb on the bridge and proceed south as you get down on the other side look for the temple on the second left road the road takes you right to the back of the temple . You cam also reach it from Thirumazisai one has to take right turn after Kalki bhagwan ashram and sriram eng college and ask for the temple . From there Thiruninravur temple  is about 4 kms.
Thiruninravur can also be reached by Suburban trains from Chennai to Arakkonam, after Pattabiram.
Legend:
It is believed that Samudraraja (Lord Varuna), who is the father of Goddess Lakshmi worshipped Lord Vishnu here. It is also said that the Perumal here is always giving dharshan (ப்ரத்யக்ஷம்) to Lord Varuna. Thiruninravur is considered as the place of Goddess as she settled here first and then Lord came here to Her place. The rarity of this temple is that the Lord Sri Bhakthavatsala Perumal is staying permanently at his in-law’s place . As Goddess settled here first, the place itself had got its name after her. In Thamizh, ‘Thiru’ means Sri Lakshmi, ‘Ninra’ means stood, ‘Vur’ means place.
The Goddess of this temple is ‘Ennai Petra Thaayaar’  also called as Sri Sudhaa Valli.
According to legend, Thirumangai Aazhwaar had visited this temple and left to Thirukkadal Mallai - today’s Mahabalipuram without singing a single Paasuram on the Lord. After he left, Sri Bhakthavatsala Perumal gave Dharshan to him again at Thirukkadal Mallai. It is said that Thirumangai Aazhwaar had God’s dharshan from Mahabalipuram itself, after which he had sung 2 Paasurams on the Lord, admiring the beauty and similarities of the deities in Thirukkadal Mallai, Thiruninravur and Thirukkanna Mangai.
Later days, with the divine instruction of the Lord, a Pallava King had constructed this temple and arranged for Brahmotsavam 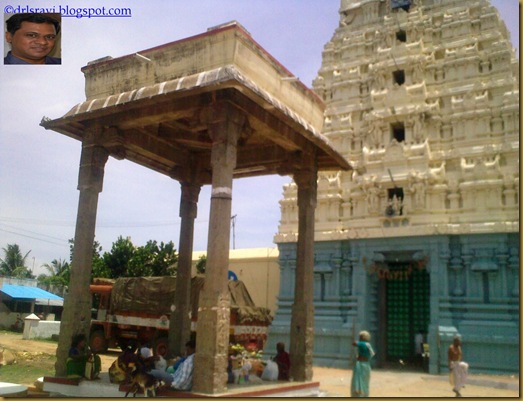 (view of the temple entrance and Raja gopuram) 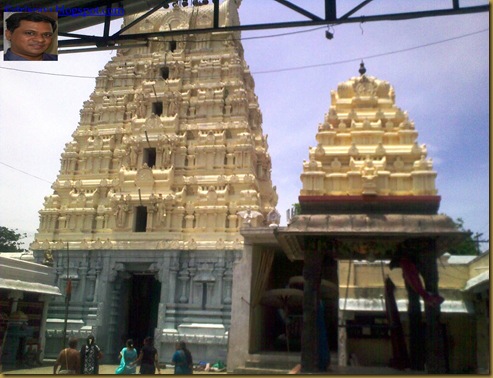 (view of the Rajagopuram from inside) 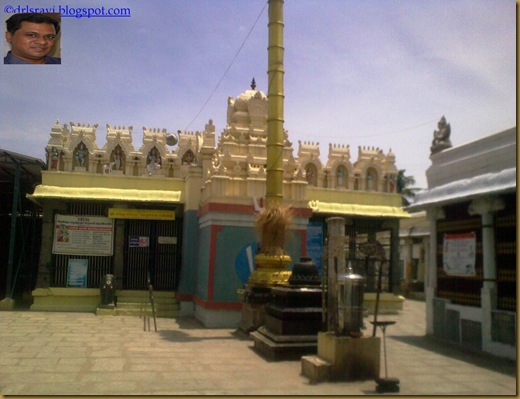 View of the Main sanctum from outside
The main deity Sri Bhakthavatsala Perumal here gives dharshan in standing posture facing east. He has Sridevi and Bhoo devi as his consorts 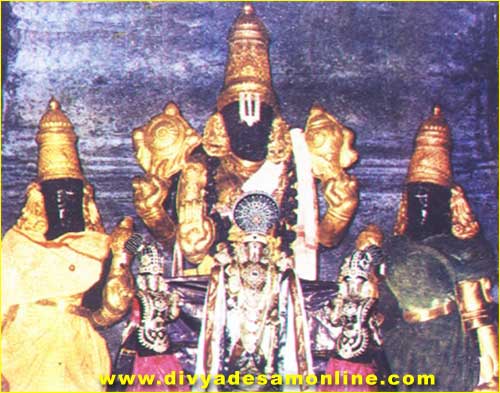 The sudha valli thayar sanidhi is in the North west.
Other deities of the temple are  Sri Aandaal, Sri Chakkarathaazhwar and Sri Aadhiseshan. Paramapatha Vaasal is located on the Northern Praakaaram. 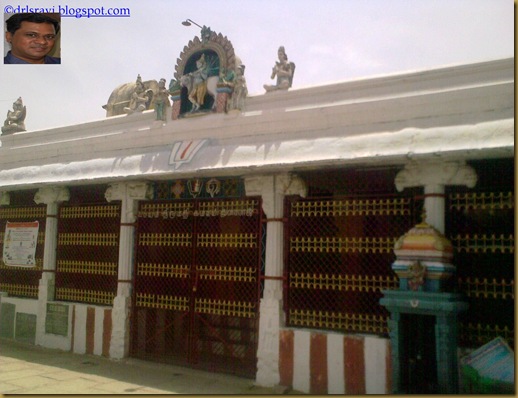 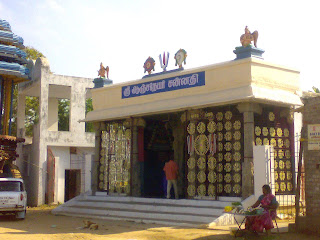 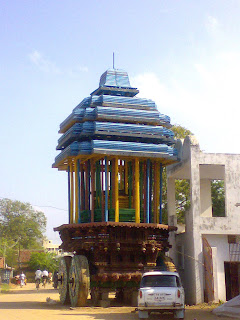 Wikipedia link to the temple 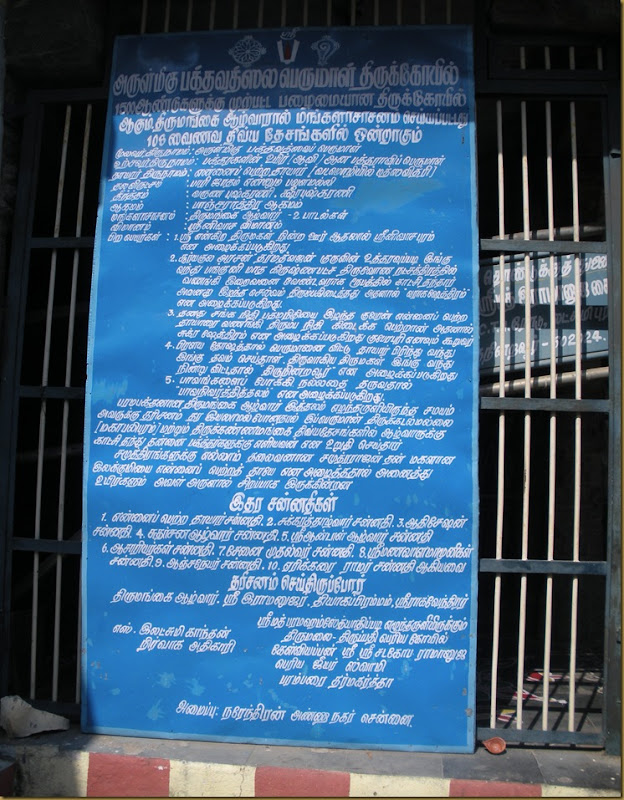 Posted by drlsravi at 3:29 PM No comments:

Today I had the chance to go to Surutapalli and returned by Tiruvallur, Tiruninravur and could see few temples.Surutapalli temple I have already blogged. The next  temple I saw was the Veeraraghavaswamy koil at tiruvallur.
The temple is one among the 108 divya desams of vaishnavas and a part of Thondai Nadu divyadesams. Amavasya days are believed to be auspicious for visiting this temple.
How to reach:
I proceeded from Surutapalli towards Uthukottai and took the Chennai Anantapur Road (extension of MTH road) and in about 30 mins I was at the temple.It was about 17.5 kms from surutapalli. The temple is in the bazaar street of Tiruvallur and can easily be reached from the highway . There is One way system around the temple and there is ample parking in the Teppakulam.

The tank is so holy that evens a sight or a touch or a bath would immediately dispel all anguish of heart. The local tradition attaches greater importance to this tank than to the Ganga, the Godavari
Today the Jeeyar of Ahobila mutt was camping there (this temple is under his control) hence there was a huge rush with VIP’s thronging and disrupting the queue but patience paid.
It is a truly remarkable temple very well maintained and the kurukkal said please come on Tuesdays when there will be no rush! 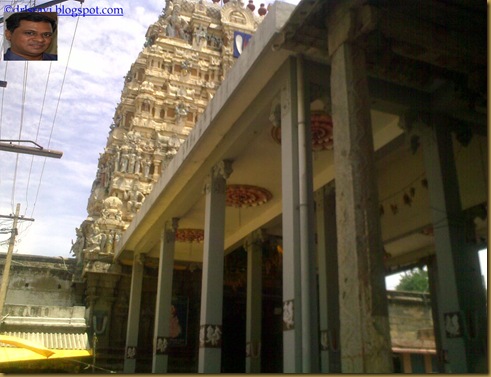 (main entrance from the gate) 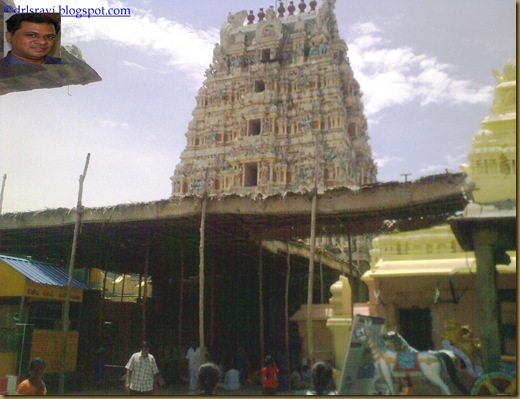 (Main gopuram from the inside)
Legend: Thiru vul oor  the place where thiru stayed for a night. It seems saalihotra maharishi did penance here and out of his bhikshai was waiting for an athithi .Vishnu  came as an old man and had bhikshai and requested all th food which the rishi happily gave . He asked for a place to lie down Uraidarkuria Ull Evvull'? (where is the  place  to sleep) The rishi happily took care of him in his own hut later he realised his guest was none other than Maha Vishnu and was overjoyed. the Lord was so happy that he discoursed the Vedas to brahma here with an affectionate right hand resting on the Rishi. The main sanidhi has the lord in sleeping posture with Right hand resting on the Rishi with the left hand in the Gnana mudra with Brahma in attendance.The deity of Veera-raghava is lying on Adi Sesa, with Lord Brahma coming out from his navel. 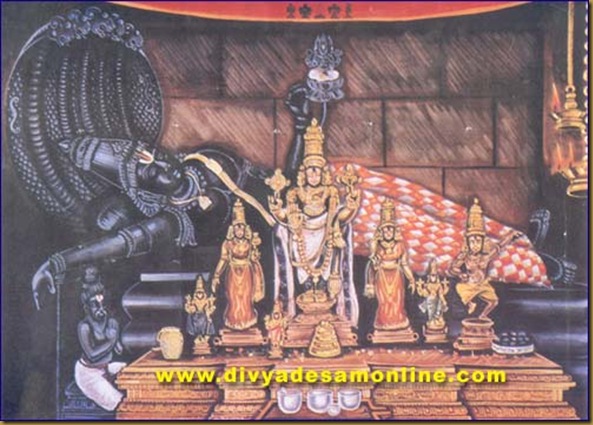 Legend also has it that Vishnu  vanquished the demons Madhukaidapas, and protected devotees here. The Vijayakoti vimaanam is named after this victory over demons.
It is believed that bathing in the temple tank, and worshipping Veeraraghavaperumaal with symbolic offerings of salt and pepper here, is a cure to many a physical ailment, and hence the deity is also known as Vaidya Veeraraghava Perumal. It is also believed that barren couples beget progeny upon worshipping here.
The Lord’s abhishekam is performed only with sandalwood oil.
This temple is under the administration of the Ahobila Mutt. It is an east facing temple with a 5 tiered rajagopuram 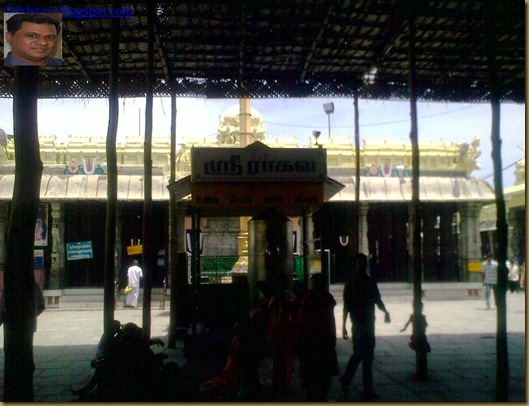 (view of the main sanctum complex from the gate)
In the north west is the Kanakavalli thayar sannidhi.
. There are also shrines to
Nammalwar
Vedanta Desikar
Andal
Ramanujacharyar
Lakshmi Narasimha
. There are inscriptions dating back to the 2nd half of the 9th century Pallava period here.
The temple is open from 6.30 am to 12 noon in the mornings and from 4 pm to 8 pm in the evenings. 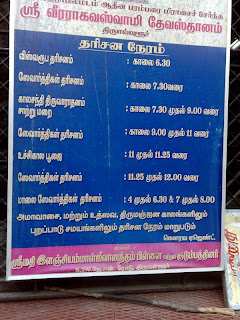 The priest Sri. PVS Bhattar can be contacted at 27660378(STD Code-044)
Mangalasasanam:
wiki link to the temple 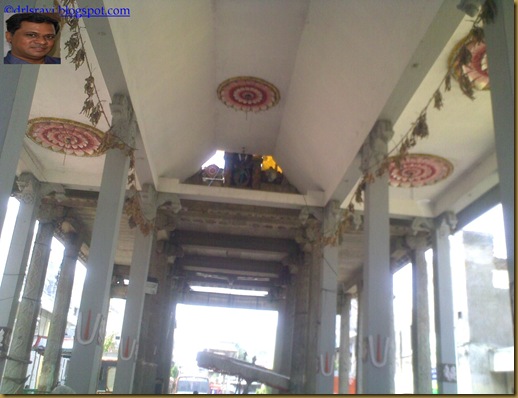 (inside the approach to the temple) 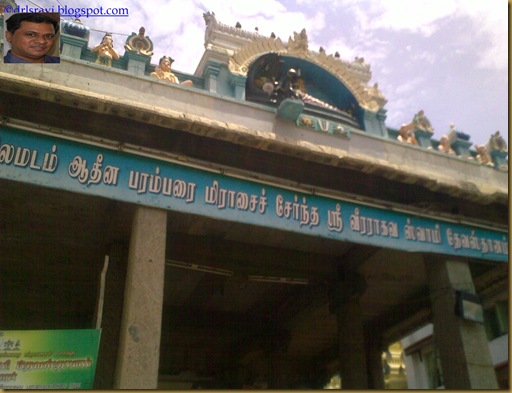 Main gate to the temple 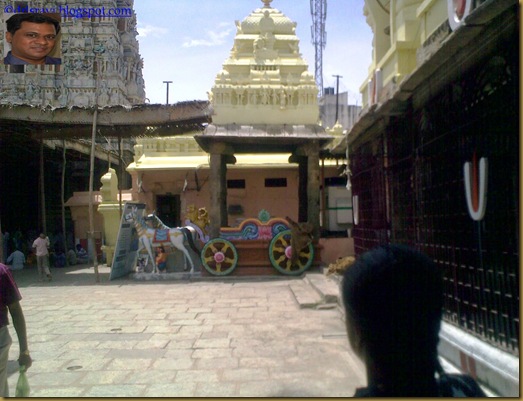 (View of the chariot mandapam just inside the rajagopuram)