Last Sunday I visited Karur to attend an engagement function and took the opportunity to visit this temple. Since It was night I could not get good photos.  This temple is the foremost of padal petra sthalams in kongunadu. Thirugnanasmbandar,Arunagirinathar,Karur devar have all sung about this temple.The thiruvisaipa of Karur devar was composed here.
How to reach:
Karur is a small place and the temple is very well known. It is in the middle of the town . 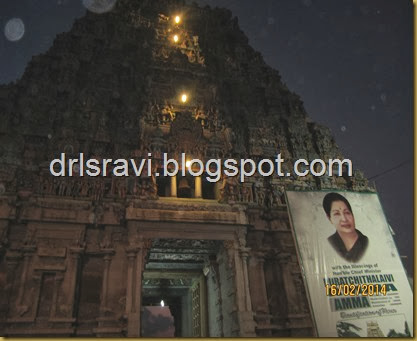 History and legends:
Lord Brahma had become arrogant as he was doing the creation.So to teach him  humility the lord directed kamadhenu the celestial cow to come here and pray to him and in turn take over the duty of brahma.The cow used to shower milk on a Shiva lingam daily and once accidently trampled on it. The Shiva lingam has a dent on the head due to this.Brahma’s ego was reduced and he performed puja to Shiva here and was given back his duties.The Sangam era king Muchukundha chakravarthy is supposed to have lived here and had received the invitation to Lord Muruga's wedding with Devayani at this place.
Pugazh Chola Nayanar.  Eripatha Nayanar , Karuvur Thevar,Sivakami Andar all great Nayanmars have lived here and done service at this  place .
Karuruvurar lived here. Some jealous priests complained to the king that devar was doing puja in the vama marga by offering meat and liquor to the lord in the temple.The charge proved baseless and in anguish the siddhar merged into the Siva lingam and this caused the tilting of the lingam.
As you enter the main rajagopuram you see outer praharam with a 100 pillared kalyana mandabam which is called Pugal chola mannar hall.
The dwajasthambam is unique in that there are sculptures of Kamadhenu, muchukunda chakravarthy on an elephant, Pugal chola mannar with a head on a plate and a Ganesha carved in four directions 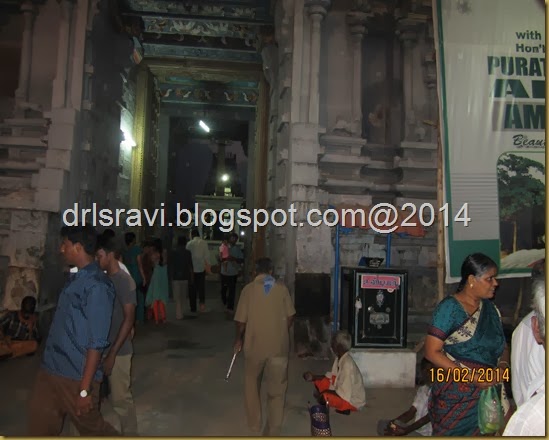 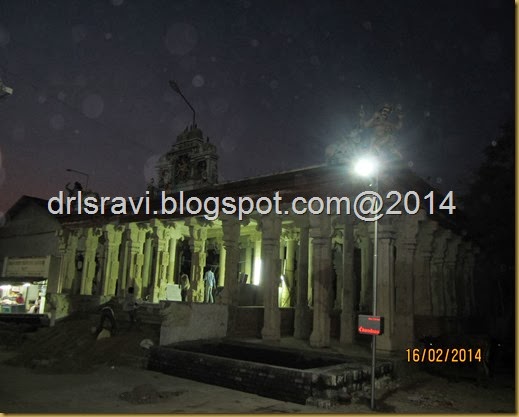 The dwajasthambam is seen below with Kamadhenu sculpture seen licking a calf. 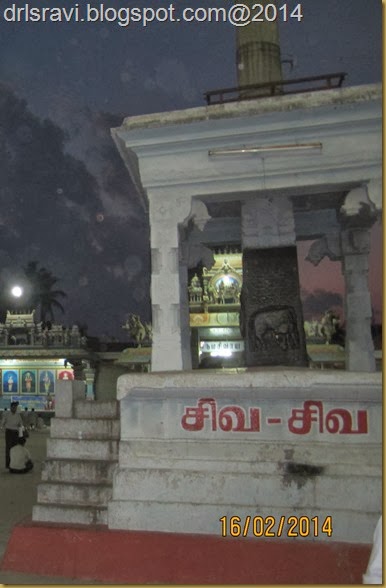 The next entrance leads us o the main praharm where there is the sannidhi of Lord Shiva as a majestic Siva lingam which is tilted to the left. The base (Aavudiar) is square.This is the Aanilai appar
The koshta vigrahas are all unique and well carved. We have Ardhanaarishwara in the back, along with Ganesh , Durga, Brahma,Dakshinamurthy and Nataraja also.
There are also sannidhis for vinayaga,Arumugham ,Mahalakshmi and the north west corner has a second sannidhi for Shiva and his consort.
There is aside entrance leading to the ambal sannidhi which is unique in that there are two sannidhis for the ambal Alankaravalli facing North , Soundarya Nayaki facing east .
Both praharams area huge and well maintained. The main Shiva temple also has  well lit enclosure for Chitraguptan and also a navagraha sannidhi and a Bhairavar sannidhi.The huge Bhairavar statue in bronze is exquisite in size and detail as also the nataraja.
The temple is famous for removing obstructions to marriage and is hence very popular
Posted by drlsravi at 11:02 PM No comments:

Today I visited these temples and the nearby petrified trees forest between Pondy and Tindivanam.. It is a A padal petra sthalam sung about by Thirugnanasambandar and Sundarar. It is also a Shakthi peetam.. Adishankara has also visited the temple.. Arunagirinathar has sung about the murugan here. There are stone edicts from the time of Rajaraja Chola I  up to 1430 AD in this temple lending the proof of antiquity.
How to reach:
The village of Thiruvakkarai is about 16 kms from NH 45 after Tindivanam towards Pondy and about 26 kms from Pondicherry towards Tindivanam. On the NH 45 cross Tindivanam and then take a left towards Mailam  at Kooteripattu just opposite the road  to Gingee. Proceed towards pondicherry and cross Mailam . After this in 6-7 kms you will reach Chendur . Take a right turn at the temple arch  in Chendur and proceed  for about 5 kms and you will reach Thiruvakkarai. There is a petrified tree forest maintained by the Geological survey of India here about a km the temple.
There is ample parking at the pond (and good clean toilets on both sides of the temple.) Seen below is the defunct temple pond . 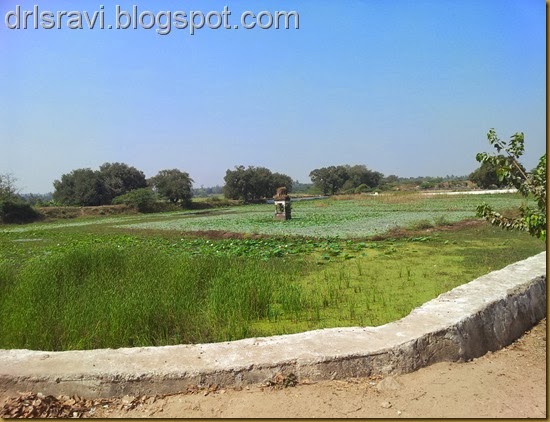 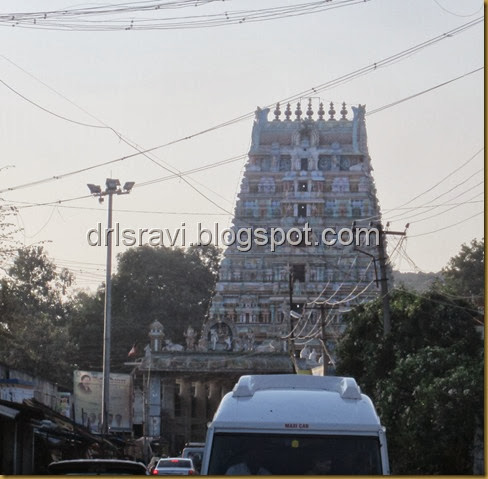 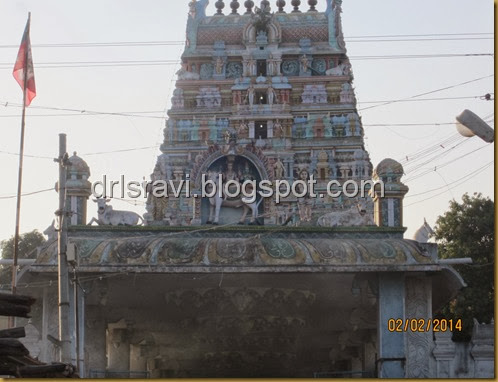 The  Temple has three main components with the most famous Vakrakali amman in the fore court, the Chandramoulishwara and Amritheshwari (also known as Vadivudai amman) in the middle and Varadaraja perumal in the back So all three major gods are here though Vakrakali is the most popular temple here.
Legends and Stories :
There was a Demon called Vakrasura who worshipped shiva keeping a Lingam in his throat. He got the boon that he will not be killed by shiva or his creation. He started torturing people of this area who prayed to shiva and since he was invincible due to the boon on request Varadaraja Perumal came here and vanquished him using the Sudarshana Chakra. Hence the perumal is seen here with the Chakra about to be released (Prayoga chakram). After the asura’s death his sister Dhunmukhi started torturing the people who prayed to the lord Shiva who deputed parvathy as Vakra kali to anhilliate the demoness. At that point the demoness was pregnant so in keeping with yudha dharma of not attacking a foetus the divine mother kali takes the foetus and puts it in her ear as an earring and kills the demoness.The ugra of the kali was subdued by Adishankara installing a Srichakram to the left of the Idol.
There are a lot of Vakrams( oddities) associated with this temple. The Shiva lingam worshipped by Vakrasura has the base turned the other way. Shani is seen with his mount the crow on his left side. In the Chandramouishwara temple the Nandi, Dwajasthambam and Shiva are all vakram not in alignment. The Nataraja in the Shivan sannidhi is vakram with his right leg lifted unlike in other temples..The Perumal’s chakram is in prayoga which is side on and not flat as usual (Vakram).
The temple is a parihara sthlam for vakra dosha of malefic positions of the planets.There is lot of crowd on tuesdays and during Rahukalam on Sundays.not to mention pournami days.
A Rs.10 special ticket cuts the waiting and gets you close to the Kali in the fore court. The kali is about 5 feet tall with 8 limbs with various weapons in each hand with her right leg raised on the demoness and left index finger pointing down . 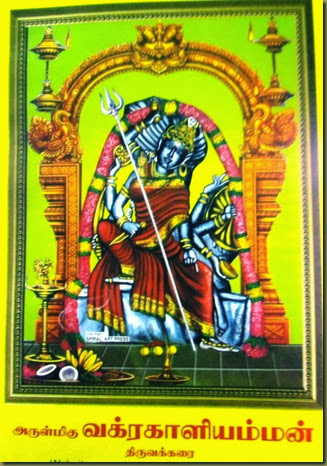 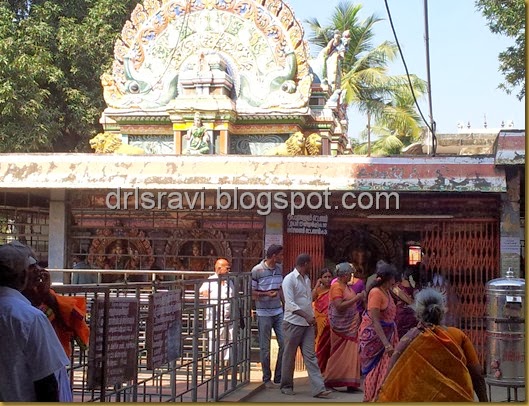 Next to this shrine is the shrine of Vakreshwarar the lingam worshipped by Vakrasura the nandi for this shiva is half submerged in cement as seen below in the pic. The Shivalingam is made of a stone that stays cool in summer and has water droplets condensing on it in winter. 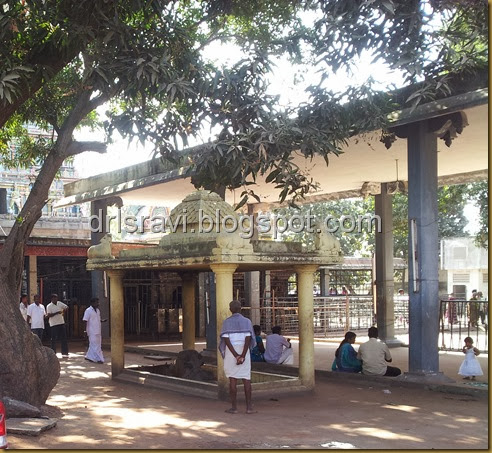 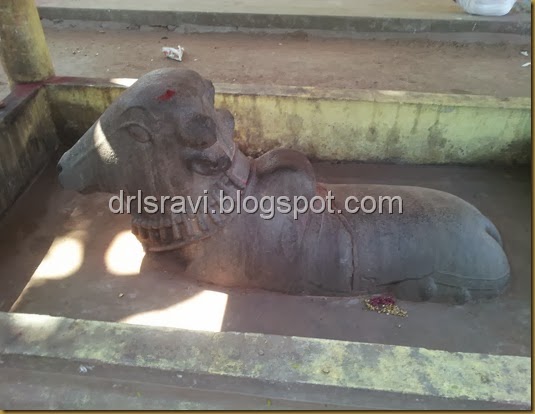 The next complex is the Chandramouleshwara temple 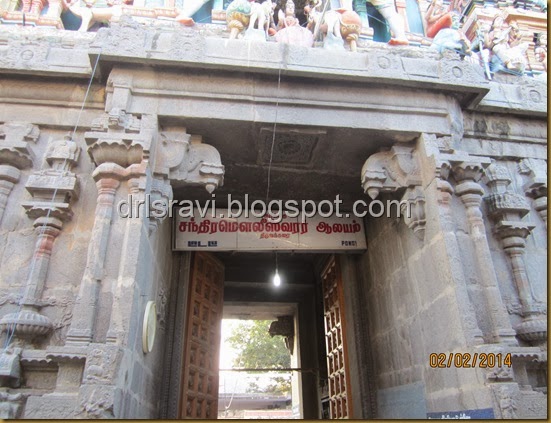 Just outside this temple is the big nandi 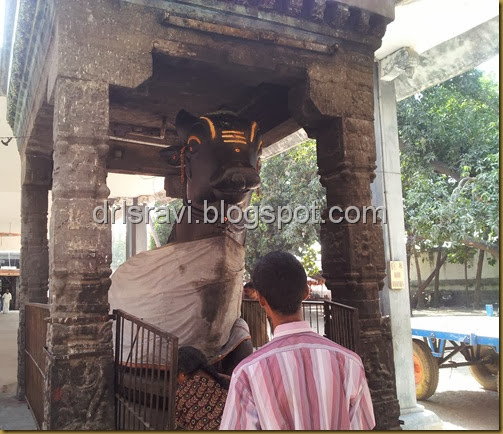 As you enter this temple we see the ambal Amruthambikai (@Vadivambikai, Vadivudaiamman) sannidhi on our right and the main shiva sannidhi in front. The Ambal Vadivudaiamman is seen standing about 5 feet tall and blessing devotees facing south. 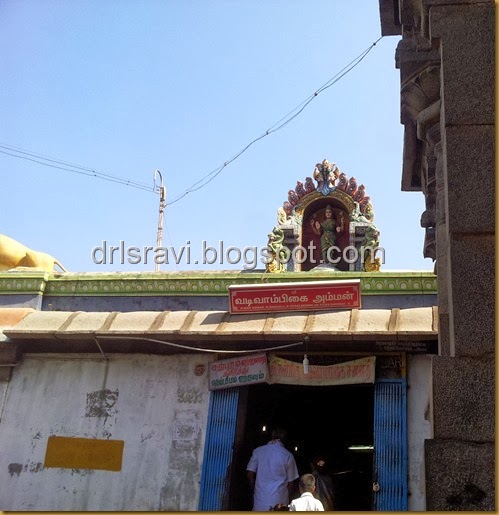 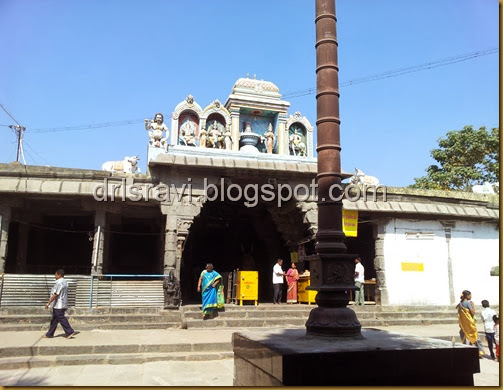 The Shivalingam (Chandrashekara, Chandramouleshwara) is a rarity with three faces carved on it ( Mumurthy) There are Chaturmukha lingams in Nepal and this is the only three faced  lingam. The three faces are Aghoram with fangs facing you, Vamana with the face on the left and the other one is the tatpurusha. Each kalam pooja is done to each face of the lingam including three abhishekams. Each face was shown for Chandran, Brahma and Indra after they prayed to Shiva here. 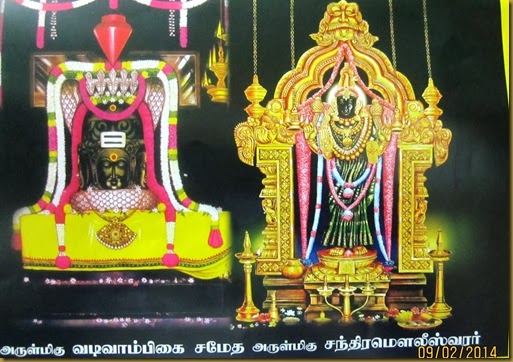 The inner shrine has the usual Koshta vigrahas Dakshinamurthy, vinayaka Arumugham,Brahma durga Chandikeshwarar. There is  a rare Bhairavar and Kalabhairavar inside.
Next to the Shivan sannidhi is the samadhi of Kundalini rishi.
The outer courtyard leads to the third shrine behind that of the Varadaraja Perumal 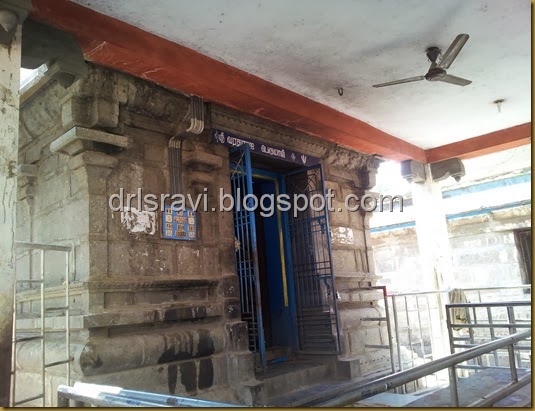 The Perumal is 6 feet tall with the chakram in side on view (Prayoga chakram).There is no thayar sannidhi here. 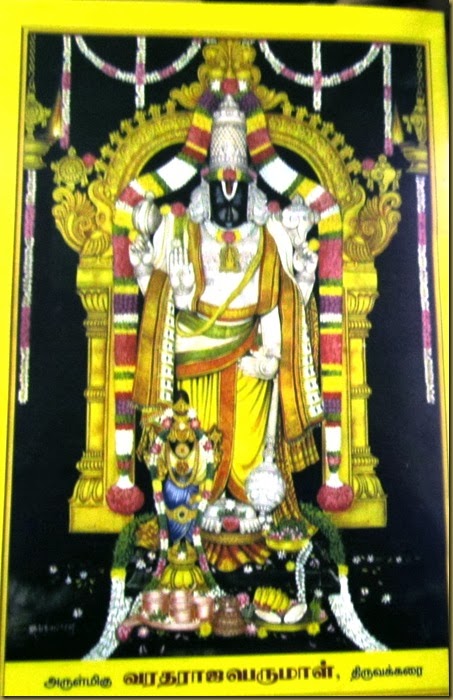 Inside is a rare vigraham of Vishnu as Ram + Krishna with flute in right hand and a bow in the left hand This was the darshan he gave to Rukmini and Radha  the Ramakrishna Rupam..
Further down you have a sannidhi for a kotilingam and a navagraha sannidhi with Shani having his mount the crow on the left (Vakram)
There is a 100 pillared Kalyana Gopuram in in between the Kali and Shivan temples 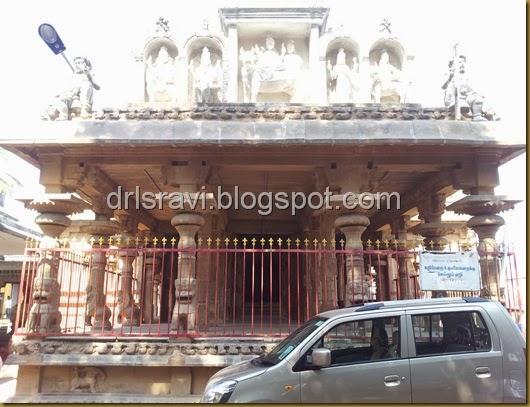 A very famous temple with heavy patronage.Kali is the presiding diety for Rahu and Ketu hence people with Shani rahu or ketu doshas thong this temple.Worshipping Kali is supposed to ward off enemies and spell success in business. Various yanthrams, ,Rakshai, threads and pooja empowered talisman coconut is sold in the sannidhis with instruction. They all sell very well.
One km away from the temple is the Petrified forest museum which the temple pujaris  claim are the bones of Vakrasura. 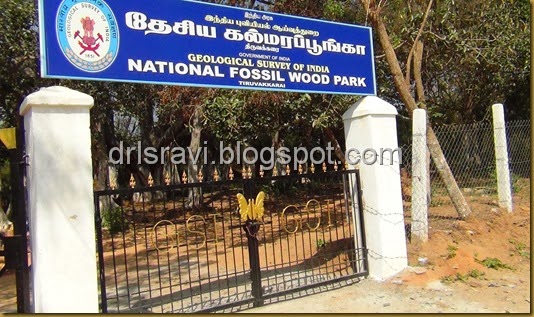 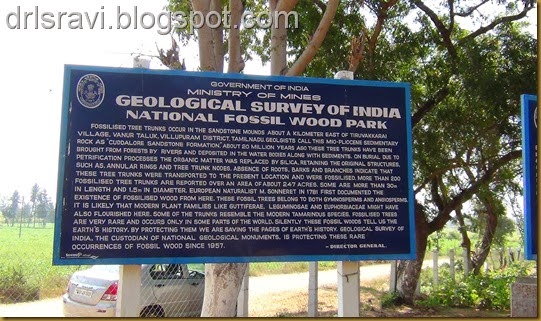 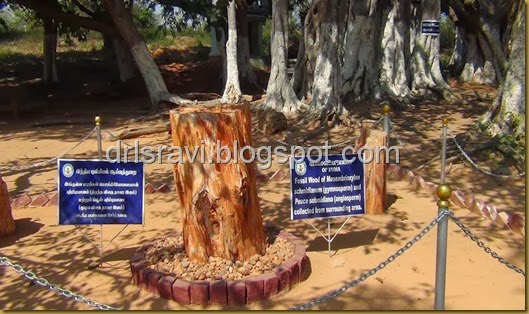 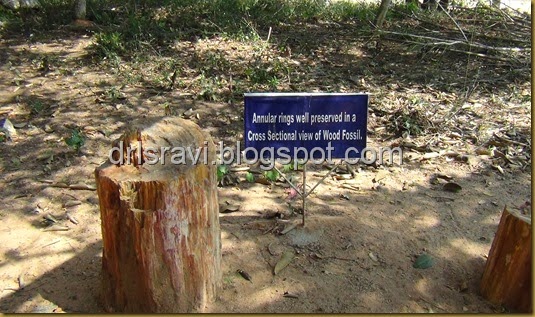 Posted by drlsravi at 8:20 PM No comments: