Yesterday 19/7/12 Enroute to Nattaraskottai from pudukottai I visited this ancient temple . it is one of the pandya desam padal petra sthalam. It has been visited by Appar, sundarar,Gnanasambandar and sung about. It is also associated with Valmiki. The ancient name for his temple is Thiruputhur (ant hill) but it is not corroborated by Ramayana. There is how ever a Sannidhi for Valmiki inside, below the sthala Vriksham Sara konrai. It is about 15 acres .

when you drive from Pudukottai to sivaganga on the Rameshwaram route you will reach Thirumayyam fort. Take the right turn to Rameshwaram and Thirupattur is about 50 kms from Pudukottai.The temple is situated on the main road itself. 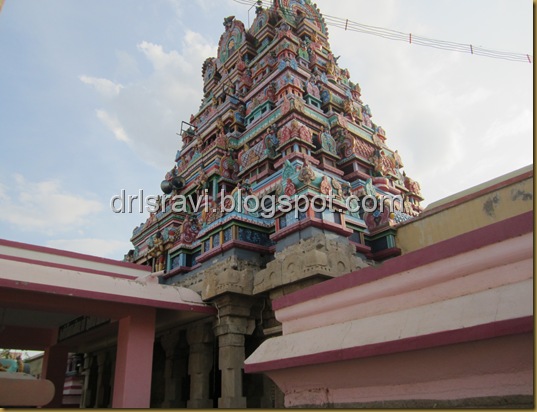 Shiva annihilated the demons Andakasura and Sambasura who were the sons of the Demon Hiranyaksha.Since he wanted relief fom the sin he went into yoga nidra here and worshipped shri Thiruthulinathar. The concept of Pranavam is said to have been realized here( that Shiva & Pranavam were one and the same) PRANAVAM  is said to have manifested itself as the Konrai Maram the sthala vruksham here 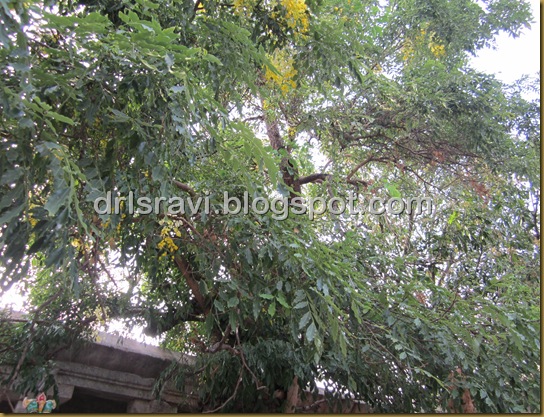 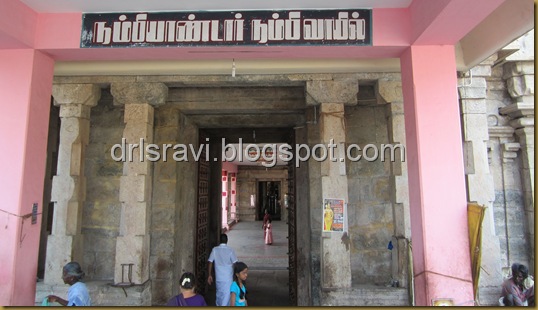 Mahavishnu has also worshipped shiva here . There is a separate sannidhi for Vishnu with  Sridevi, Bhudevi a well as Hanuman the Lakshminarayana sannidhi.

Sri Ninra Narayanaperumal Temple:
It has served as a place promoting Vaishnavism. During the rule of King Varaguna Pandiyan II (862-885) a Perumal temple had been existence in this place. Lord Perumal installed in this temple is referred to as Jalasayanathupadarar in the inscriptions of King Varaguna Pandiyan II. In addition to this temple, for the sake of Lord Perumal in the standing posture, another Perumal temple was constructed in the south of Sri Thiruthalinathar temple during the Pandiya period. It contains inscriptions of later Pandiyas dating back to the 13th century. The inscription of King Maravarman Sundara Pandiyan (1216-1239 A.D) refers to this other temple as Kola Varaga Vinnagara Emperumal temple and donation of lands in 1237 A.D to meet daily expenses of the performance of pojas.

The navagrahas are in the sitting posture  here hence they will wait to hear your requests!

Yoga bhairavar is without his vahanam here.The Guru dakshinamurthy here is also without the four disciples

There is also a shrine for Lord Tirunageswarar where people worship during Ragu Kalam time. According to the legend, the prominent snakes Vasuki and Kaarkotakan worshipped Lord Shiva here and hence the separate shrine for Tirunageswarar in the outer 3rd Praharam 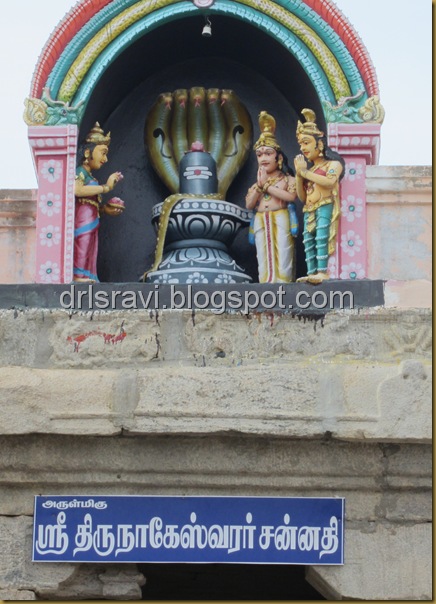 Lord Muruga is facing north with His consorts Valli and Deivanai.  Saint Arunagiriar had praised Lord Muruga of the temple in his Tirupugazh hymns.  Lord Nataraja graces in His Gouri thandava dancing form.  Mahalakshmi wanted to see the thandava of Shiva and here he blessed her with that dance 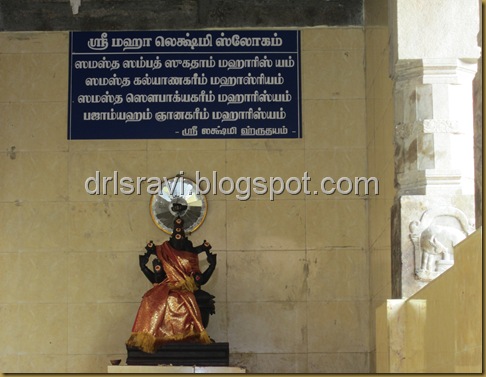 As you enter the temple you see the first praharam with an elephant enclosure and the Peacock strolling around. 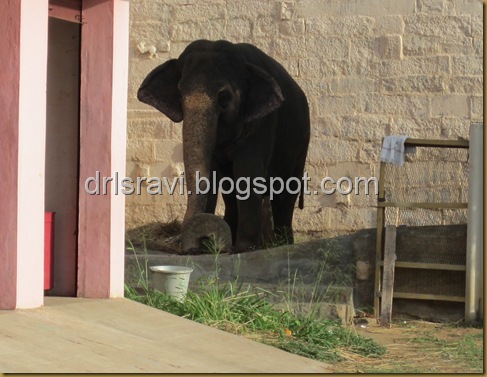 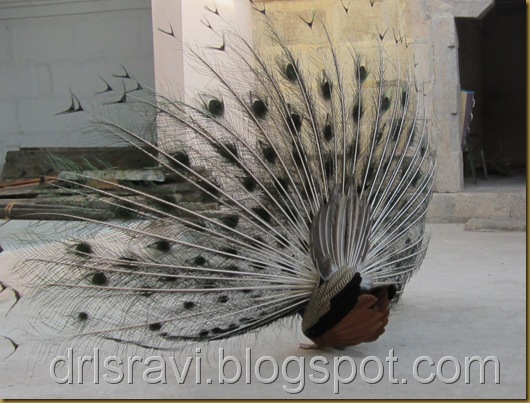 The Sannidhi for  Bhairavar and Vishnu are in this praharam facing west and east respectively. The Bhairavar temple has an unique epoxy coating to prevent damage to the carvings. 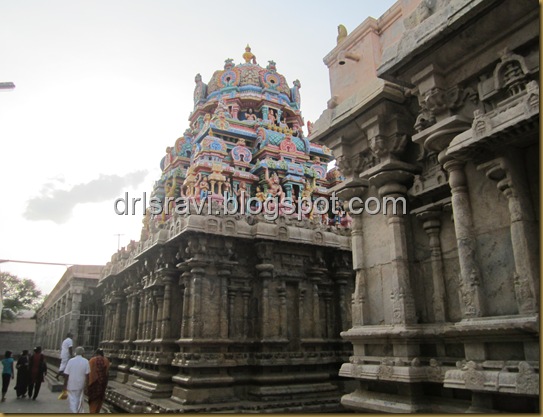 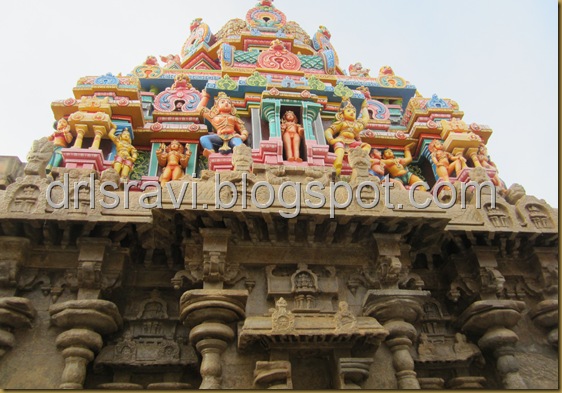 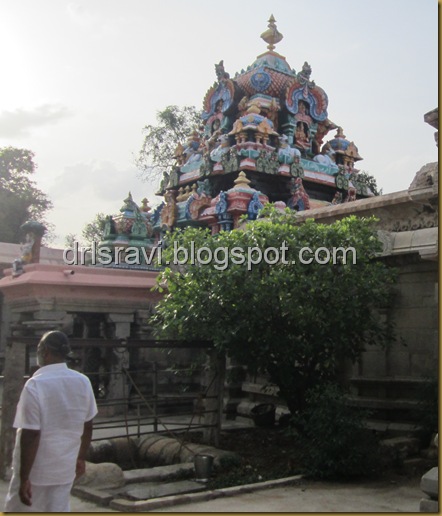 The Sthalavruksham, Murugan sannidhi , the vinyaga and Valmiki sannidhis are situated behind the main temple. 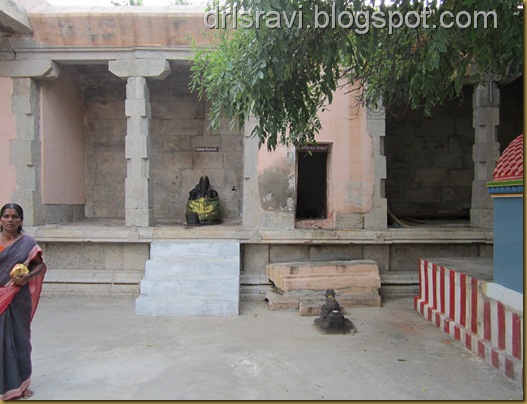 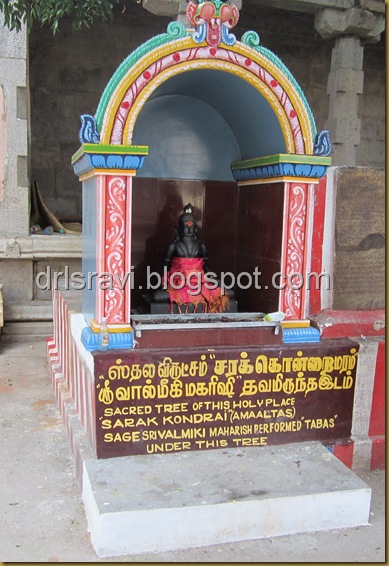 The Carvings here are exquisite as are the Ramayana scenes below 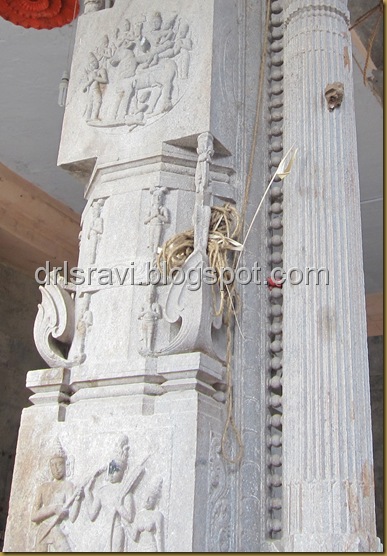 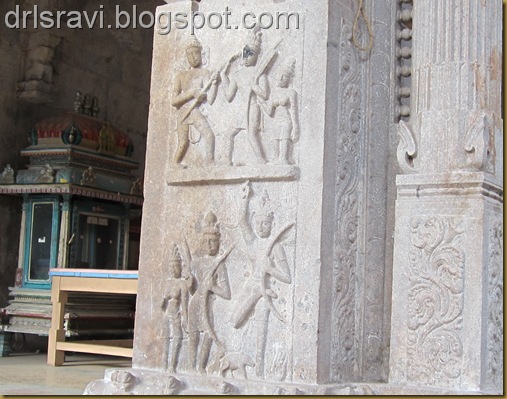 Lord Shiva is in the main sannidhi as a swayubhulingam here.

The temple is quite big with  a well maintained ambience.

On 19/7/12 I had the chance of fufilling my 5 year old prayers of visiting this temple at Nattarasankottai in Sivaganga district.It is a famous temple built and maintained by Nagarthars and is famed to help people for eye related problems. I expected to find a crowded temple especially in the month of adi and was pleasantly surprised to find it clean, large with exquisitely carved images and with very friendly helpful attenders.The carvings were all so beaytiful.
How to reach:
The temple is situated in Nattarankottai which is almost a part of Sivaganga. The temple can be reached from Madurai, or from Pudukottai. It is about 4 kms from Sivagangai from Melur on the madurai side. I went from Trichy via  Pudukottai. It was exactly 125 kms. from Pudukottai reach tirumayyam on the Rameshwram road and take the right towards Thirupattur and cross Thirukoshtiyur to reach Mandiyampattu. In about 3 kims at 117 kms from trichy there is a board showing the left turn to the temple before Sivaganga. 8 Kms on this road is the temple.
History and legends:
The temple has been built by the Nagarthars as a way of fulfilling their vows to the Goddess.The Goddess Kannudainayaki was present in this place for many years.It was in the 18 th century a temple was built for her. There is a big pond in front and the temple itself is spacious.
It seems a yadava man who was daily walking here with milk on his head daily used to stumble on a stone and spill the milk on the stone. Enraged one day he decided to dig out the stone when it started bleeding and they discovered amman idol. 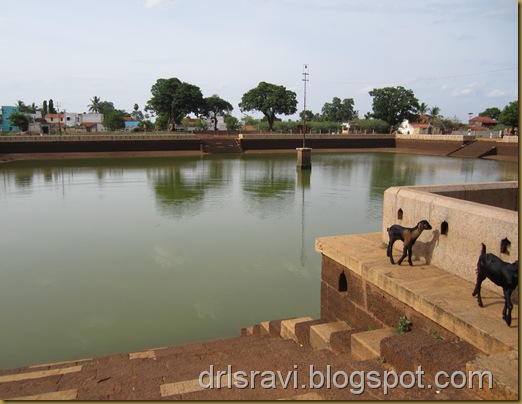 Excerpts from From the wikipedia:(http://en.wikipedia.org/wiki/Nattarasankottai)
The deity, Kannathal alias Kannudaya Nayaki Amman is famous for her powers in giving the boon of eyesight to the devotees with eye defects and other ailments. She is seen with eight hands and has an udukkai (a percussion striking instrument) and muvizhai sulam in her hands. Her left leg stamps the Asura by name Mahishan. As per mythology, Kannathal emerged with blessings she obtained fromLord Siva (the God of Creation,Sustenance and Destruction of evil, in Hindu Mythology) to vanquish Mahishan, who was giving trouble and anxiety to the people. Mahishan had a rare blessing from Brahmadeva that he will not die in the hands of men and he will only be executed by a woman. After heeding to the voices of the tortured people and Devathas, Kannthal appeared in Simmavahanam (Lion as vehicle) and executed him by stabbing in his heart. She is praised by many a number of devotees who have experienced her blessings. One could find names like 'Kannappan' (for male children), 'Kannathal', 'Kannammai' and 'Kanmani' (for female children) abundant in the community. Mavilakku, a flour made offering for the Goddess is offered by the devotees to appease her and to get her blessings. Vaikasi Visakam festival, celebrated for 10 days, is famous for the temple and on the 8th day, the Goddess in the form of KaliattaKannathal decorated by 'Kazhuthu Uru' (a Nagarathar Ornament) is taken in the silver adorned chariot around the temple.
Special government buses ply during these days from Madurai. The temple is famous for its architectural marvel and Golden Kumbhams over the Temple tower. Kaliattam, a festival celebrated once in 60 years was celebrated in 1996 with much pomp and pageantry. The first 'Kumbabishekam' (Consecration of the temple) took place on September 12, 1938, the second on September 6, 1976 and the third on May 1, 1989. The temple is efficiently managed by the village Nagarathars. 'Sevvai Pongal' during the Tamil month Thai, is a festival that is celebrated by Nagarathars of this village, during which tickets will be pooled and drawn and based on that places near the temple are allotted to all the nagarathar families for making Pongals. Non-Nagarthars also contribute a lot to this festival. Other festivals of the temple include 'Muzhalkuttu Thiruvizha' during the Tamil month of Aadi, 'Navarathri' during the Tamil month of Purattasi and 'Thailakkappu Utsavam' during the Tamil month of Thai. There are many temples in Nattarasankottai of which a Sivan temple is also famous. AshtamiThiruvizha and Sivarathri are the famous festivals of this temple. In addition that Nattarasankottai has lot of temples is covered this town like Ayyappan, Sivan, Perumal, Hanuman, Ramar, many marriammans etc.
The famous poet Kambar, who translated Valmiki Ramayana to Tamil, spent his last days in Nattarasankottai and his tomb is situated here. Not many public know of his tomb. The renowned town of Kalayarkovil which is famous for Kaleeswarar temple, is situated few miles away. The famous Kollangudi Vettudaiyar Kali temple is also nearby. 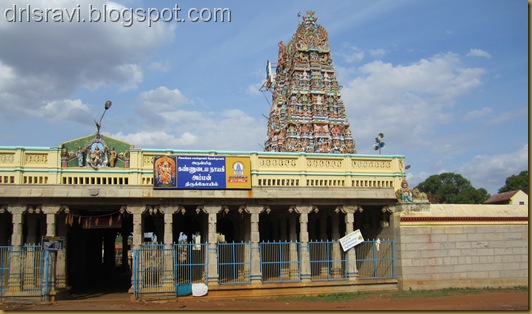 The Main entrance leads into a multipillar hall with eloborate carvings 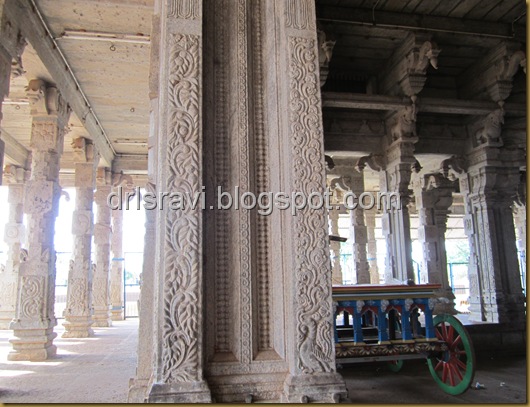 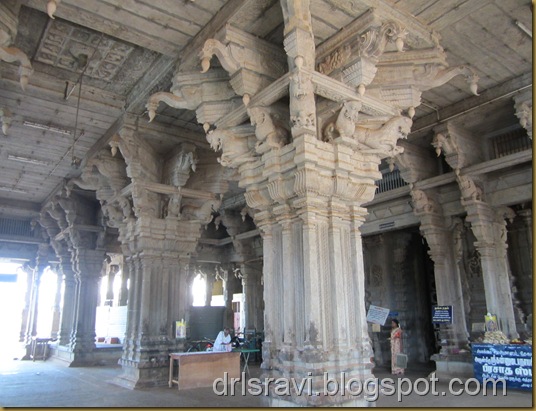 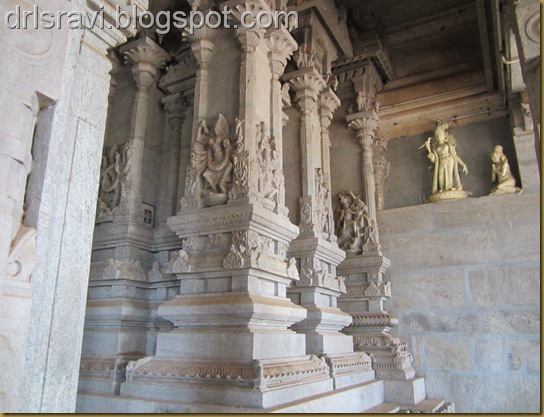 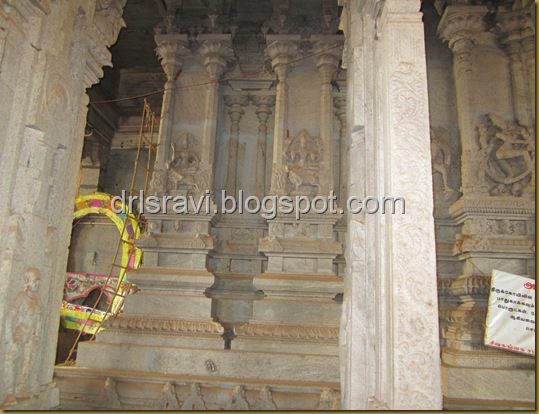 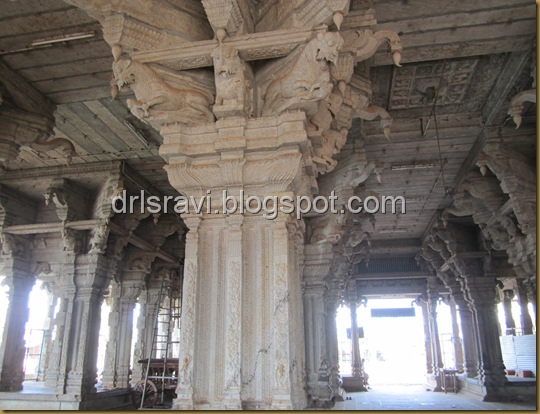 The temple main praharam is east facing and you are led into a praharam with the main garbagruha in front.
The Amman is in the standing posture with 8 upper  limbs and is smiling,
View from behind the garbagruha 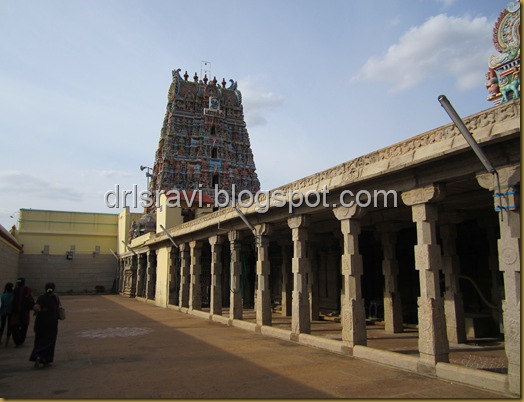 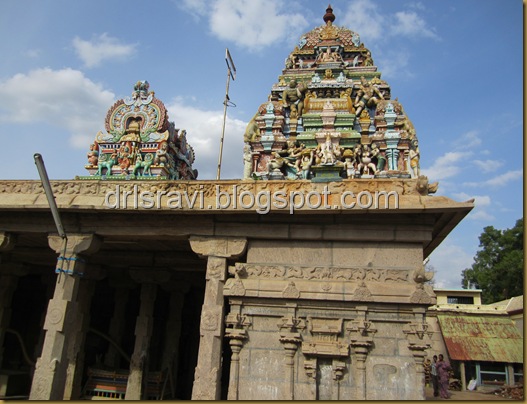 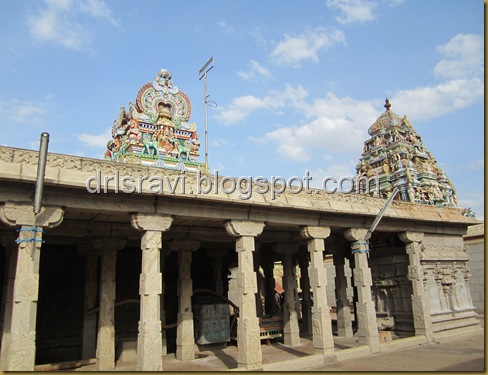 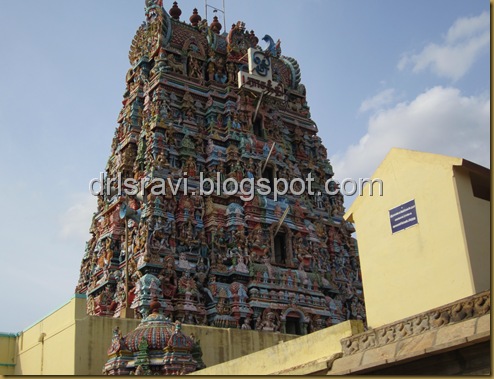 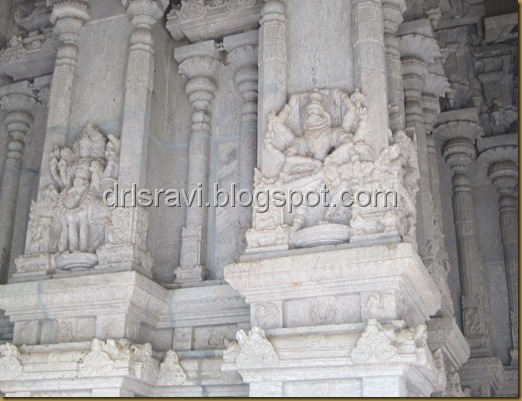 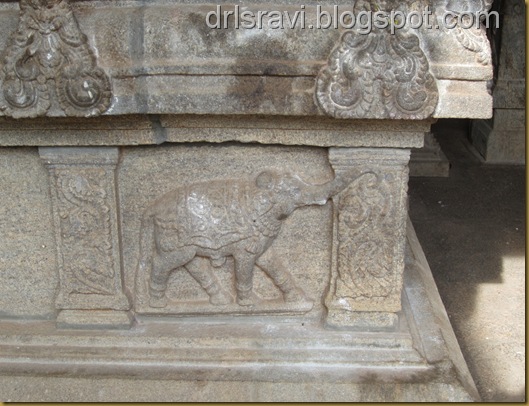 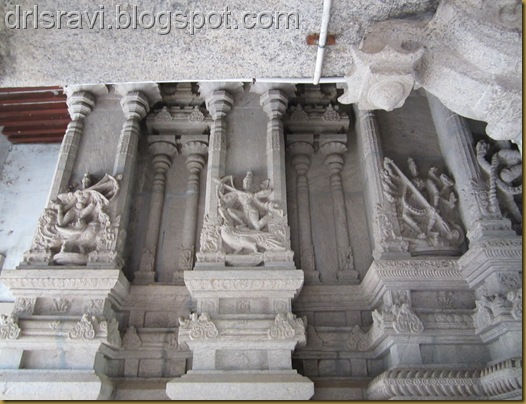 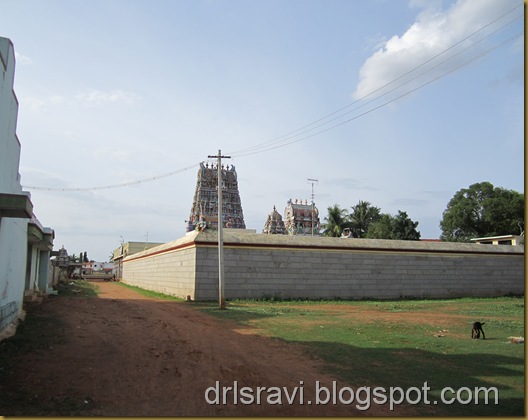 It is  a small and peaceful temple which gave me immense peace
Posted by drlsravi at 6:48 AM No comments: Links to this post