Its amazing how many important temples are in sight but not patronised well. This temple was in the news recently as the Bronze Nataraja of this temple was  retrieved a few years ago from abroad
The names of the lord and ambal corresponds to the names of the parents of Adi sankara

How to reach:
The temple is on the southern bypass of Kumbakonam  on the east about 5 kms in Sivapuram area and very easily found out. The approach from the highway is very narrow but the travel is worth it
When I visited it was sunset time and it was totally deserted 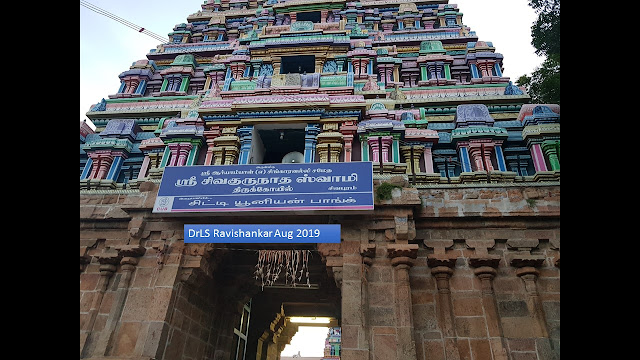 Legends and Stories:
The child prodigy Thirugnanasambandar refused to set his foot here and moved around rolling on the ground as he felt there are thousands of Shivalingas in Sivapuram.

This place is very famous for the Bhairava here and you can see a separate sannidhi for him well maintained and of course lot of Bhairava vahanas as you can see in the pictures. In fact they were brazen enough to enter all the sannidhis and a few even locked out the oil lamps which were lit. Maybe the fried wicks are a delicacy  who knows?

Thirunavukkarasar(Appar) has sung about the temple.

Notably this place is famous for devotees doing angapradakshinam for fulfillment of prayers.

It is also famous as Kubera kshetra locally

Inside we find a carving depicting that Mahavishnu came in the form of a white boar and prayed to lord Sivagurunatha offering a bunch of plantains.

The temple by itself is compact and neat with an east facing Shiva sannidhi and a south facing Aryambal sannidhi.

The kosta vigrahas are beautiful.

Bhairavar sannidhi is present outside. 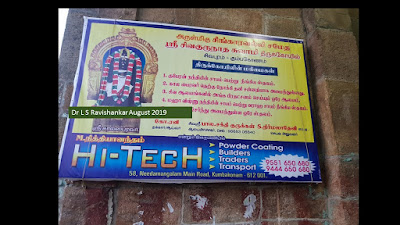 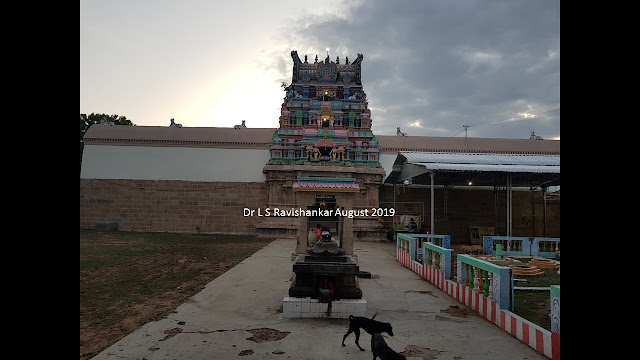 Nandi in the outer praharam 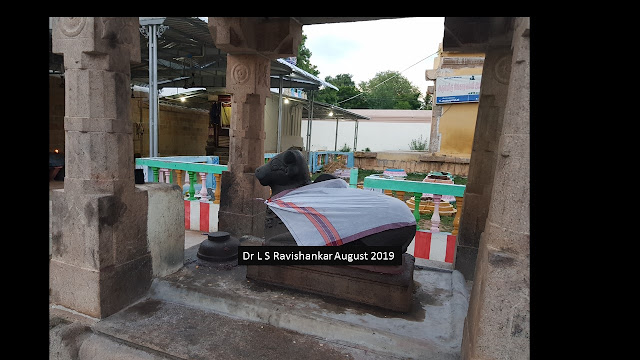 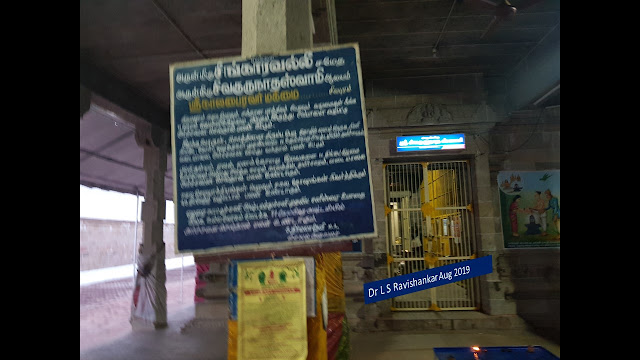 Below are the Koshta vigrahas 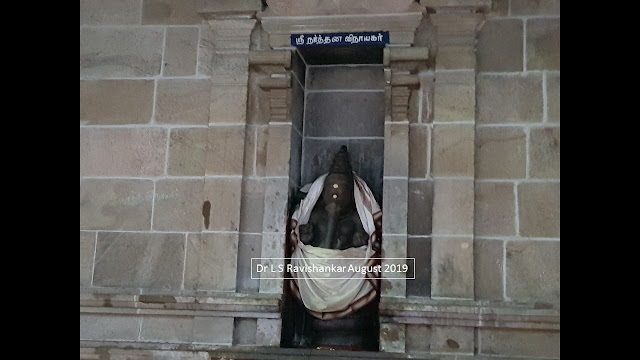 View from the Sivan sannidhi towards the Main entrance 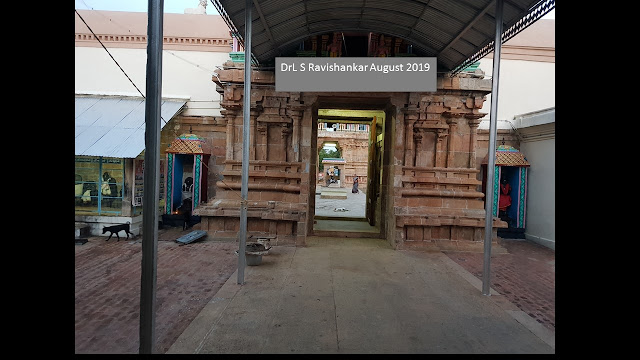 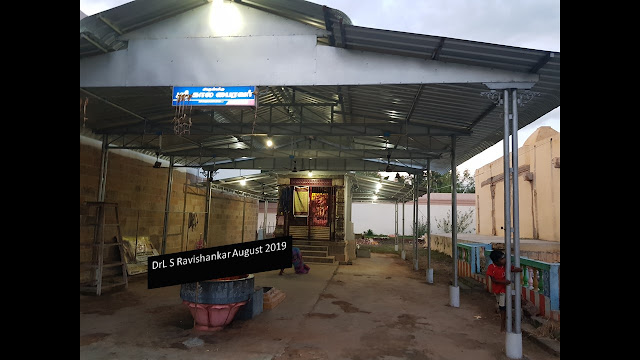 One of the ancient temples rebuilt by Kochengatcholan as a elevated Temple(mada kovil) It is related to the legend of pralaya and regeneration of life forms. The lord is also known as Koneshwara (one who loves Ko -humans), Amritakateeswara( custodian of the pot of amruth), Vanmeekinatha( one who arose from an ant hill)
How to reach:
The temple is on the highway from Kumbakonam to Tiruvarur midway .About 18 kms from Kumbakonam  in front is a pond Amritha saras.It is easily seen 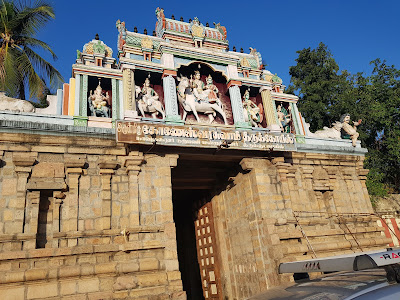 Legends and Stories:
When pralaya occurred the life forms were preserved in a pot by Brahma and when it rolled down during the floods,  it came south and was hidden in an ant hill here. Garuda wanted to set his mother and siblings free by giving them amruth from this pot when it slipped . In retriving this garuda used his beaks and injured the Vanmiki nathar in the ant hill.The lord bears the mark till today. The pot also broke releasing the life forms this is the amritha saras in front of the temple and the pot's remnant bottom portion rolled into Kumbakonam this is the Adi Kumbeshwara koil and the neck (kuda vasal  Kudam+pot Vasal=entry door) fell here

The Koshta vigrahas in the courtyard

Posted by drlsravi at 7:12 AM No comments:

How to reach:
The temple is 5kms west of the Vaitheeswaran koil on the main road and easily found


Among the 63 Nayanmars who composed poems and spread shaivism Nandanar is unique. He was a farm labourer and was denied permission by his owner to visit Chidambaram. He was for ever asking his boss permission to visit Chidambaram and forever being denied(thirunaalai povar  nayanmar) The boss told him if sowing and harvesting is done in 1 day he can go and lo  next day ,miraculously the crop was harvested. The Boss prostated at his helps' feet and so Nandanar set out   to
Chidambaram. en' route he arrived at Thirupungur and sung a song on Shiva who was so moved and asked Nandi who it was . He was told that Nandanar had come and was craning his neck to see Shiva Shiva directed Nandi to move so that nandanar could have a better look!so the nandi here is to a side

Thirunavukkarasar, Sundarar,Thirugnanasambandar have all sung about this temple
Once Shiva and Parvathi had an argument who was more beautiful they asked Brahma to judge, brahma dropped 5 darba grass and asked the two to follow the path where the Grass fell, there were 5 lingas and looking at them Shiva felt Parvathy was beautiful and she felt Shiva was better looking 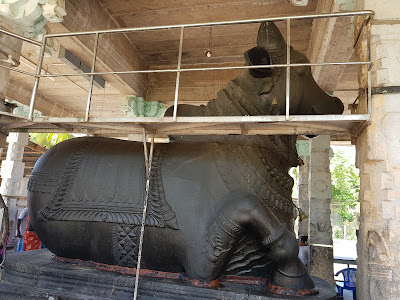 The Koshta vigrahas and sannidhis inside


This temple is right on the highway from Chennai to Kumbakonam and I have passed through so many times but temple was closed at those times. After visiting the Triloki temple I rushed to see this temple a very well maintained temple attached to the Thiruppanandal aadheenam (Kasi madam)

How to reach:
The temple is right on the highway from Chennai to Kumbakonam from the lower anaicut .You can not miss this mammoth structure on the left
Legends and Stories:

A devotee called Mantharai used to offer garlands to the lord .One day while offering her Saree slipped and she caught it and could not reach the lord to garland him hence the merciful lord bent his red head (Sen jedai appan/Aruna jatadhara = locks like the early morning red sun  before sunrise) in front to receive the garland . The King tried to straighten the lord but entire army could not but a nayanmar Kungiliya kalaya nayanar accomplished the task with a rope tied around his neck he prayed to the lord and his devotion straightened the Shiva linga

Entrance to the main sanctum which is facing west


The kosta vigrahas were unique as below

An ancient well maintained Temple with peace and tranquility

Posted by drlsravi at 6:40 PM No comments:

Once in a way you land up in a small temple and the experience is euphoric due to the hidden gems here.I was visiting Thirupanandal from Kumbakonam and saw that there was another temple nearby 10 kms and visited the same and what a great sight I saw inside. Two exquisite rare sculptures depicting  Rathi Manmatha inside and Shiva Parvati riding Nandi (vrushabarooda) outside with Dakshinamurthy standing

The place has a perumal temple, a miniature of Gangaikonda cholapuram temple built by Rajendra chola. Triloki was the birth place of Trilokya maadevi one of the wives of Raja raja Chola I  and the temples were built by her here

The priest very patiently enplaned all the features to us ,This statue is present right inside at the entrance to the sanctum sanctorum

Outside on the North east is the enclosure of the Vrushabharooda 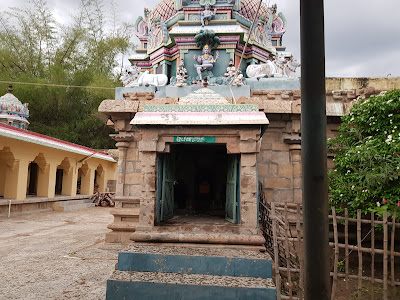 Posted by drlsravi at 6:05 PM No comments:

Having travelled through Aduthurai betwen Kumbakonak and Mayavaram I had an opurtunity to visit this temple kast week.It is a fairly busy place and the temple is easily found,

How to reach:
I travelled from Kumbakonam and took the right turn after the bus stand and in 3 kms I took aleft and eached the temple.
It can also be reached from Maruthuvakudi from the south as well as Thiruneelakudi on the Kumbakonam Karaikal road

The original name of aduthurai is "Then Kurangu Aduthurai" (the southern place where monkeys played). It was the place where sugriva came for protection when Vali chased him The Shiva here (Aabathsahayar) transformed him into a swan and hid him on top of the Sthala vriksham to protect him from the wrath of Vali. There are sculptures inside to attest to this fact enlarge the photo below and you can see

Posted by drlsravi at 5:24 PM No comments: