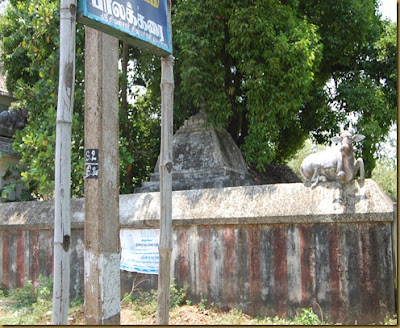 On the east coast road  after leaving Sirkazhi in about 15 kms you will see the road to Poompuhar. Take a left here this is the approach road to both Thiruvenkadu and Keezhperumpallam the Kethu Sthalam just before reaching Poompuhar you will see the left turning to thiruvenkadu. Thiruvenkadu houses the great Swetharanyeswarar temple with the famous budhan kshetram Agora Murthy and Chidambaresha it also has the Adhistanam of Brahma the father of the Goddess Gnanambikai..This is the town where the 57 the pontiff of the Kanchi mutt is in. Jeeva samadhi. You will have to ask for the kanchi mutt samadhi in the sarboji agraharam which is just behind the temple in a road that is parrallel to the north  side of the temple.
This is the place where Sivan Sir the poorvashrama younger brother(fondly called sachu)  of Mahaperiyava had graced by his presence before shifting to Chennai
Here is a recent pic from my visit on 06/03/17 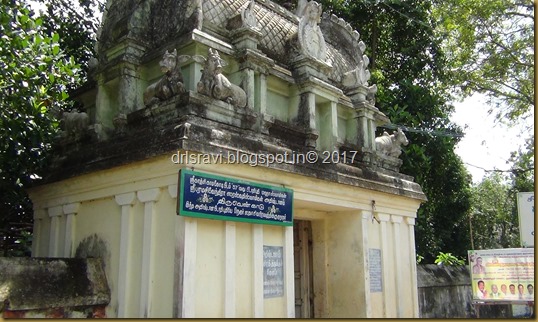 There is a small temple in front of the adhishtanam 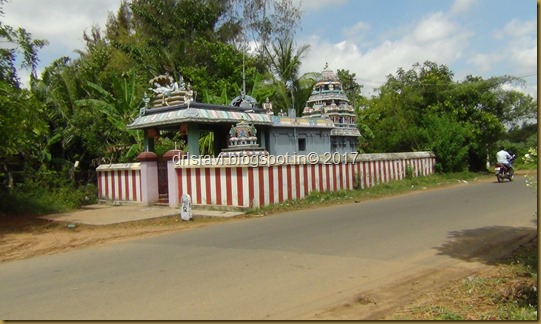 57.Sri Paramasivendra Saraswati II :
http://www.kamakoti.org/peeth/origin.html#appendix2
He was the son of Parameswara, native of a village on the bank of the river Pampa. He was known as Sivaramakrishna before Sanyasa. He was the Guru of the great Sadasiva Brahmendra, the author of the Guru Ratna malika and the great Brahma Jnani. The greatness of Paramasivendra may be gauged from the fact that Sadasiva Brahmendra used to carry the sandals of the Acharya always on his head. And the greatness of Sadasiva Brahmendra may also be understood by an incident, which is recounted in popular tradition, Sadasiva steeped in the bliss of Brahman, was wandering about as an Avadhuta, to all appearances like a mad man. Someone reported to Paramasivendra that Sadasiva had gone mad. The Acharya is reported to have answered "I wish I had but a touch of that madness". So great indeed was Paramasivendra that Sadasiva Brahmendra has immortalised him in his Atma Vidya Vilasa. This Acharya wrote a commentary on Siva Gita. He attained mukti at Svetaranya (Thiruvenkadu) in Tanjore District on Sukla Dasami in the month of Shravana of the cyclic year Parthiva (1586 AD).His pontificate was for 47 years.He is the preceding Guru of Sri Vishwadikendra Atma bodhendra Saraswathi who is interned at Vadavambalam (Link to my blog on this adhishtanam)
The adhishtanam is being taken taken care of by Sri.Sivaramakrishnan who  family has been in this holy duty for the last 3 generations. 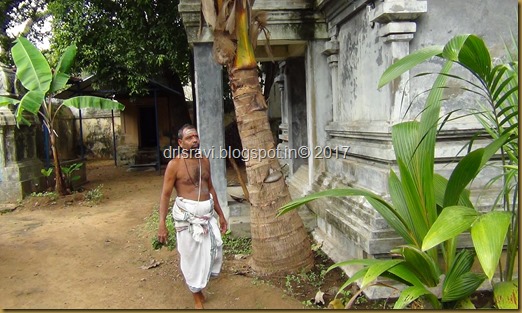 The adhishtanam of the saint is a jeeva samadhi and strict rules to be followed here as explained by sri.Sivaramakrishnan  are
1.Do not come empty handed some fruit, flower, oils etc to be carried
2.please remove the shirt as you enter
3. please wash all sides of your feet before entering the sanctum
There is a Chakrini temple inside on the northern side where a srichakram has been buried by Mahaperiyava , The south facing goddess is  very powerful
there is also an adhishtanam of the pet sishya the avadhoota Sadashiva brahmendra.( This sage has multiple adhishtanams at Nerur, here, lahore etc) 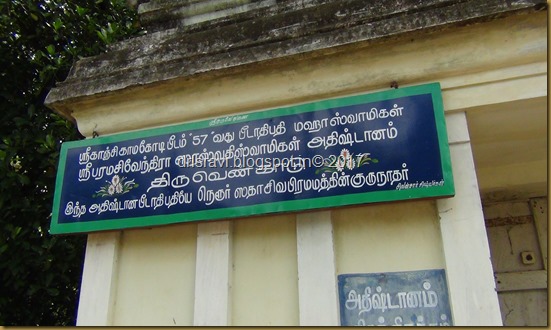 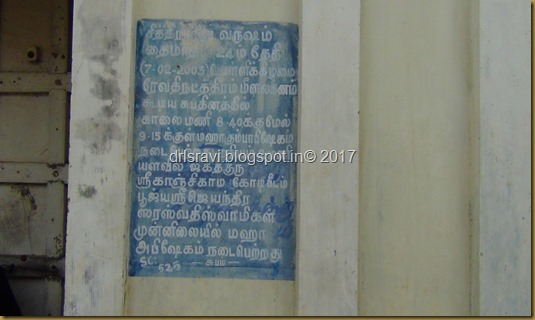 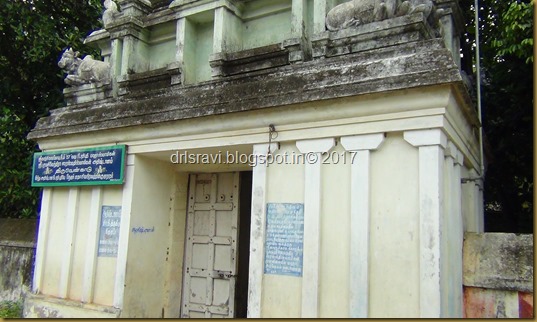 below is the samadhi of Sri. Atma bodhendra 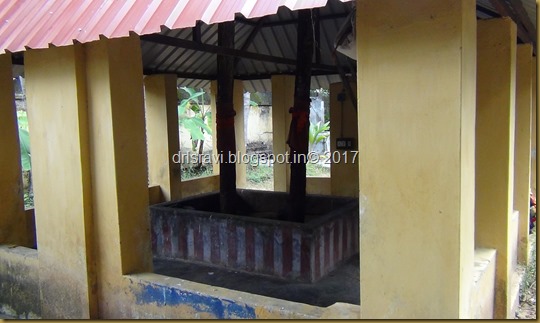 other deities in the outer praharam 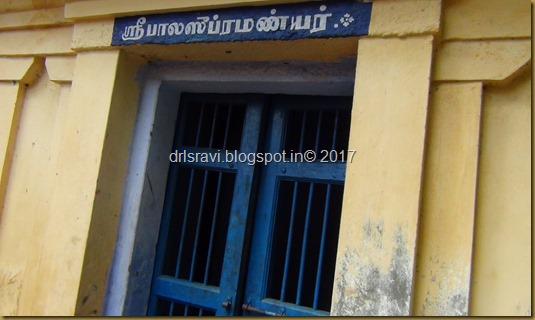 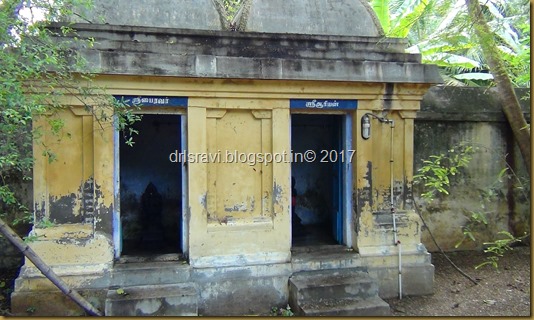 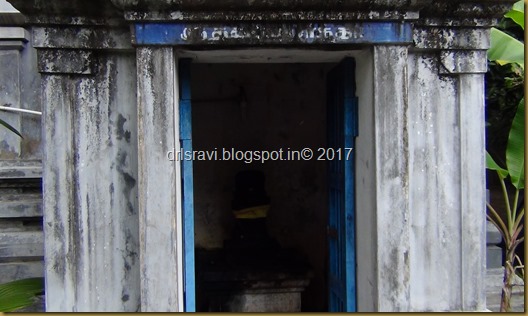 Entrance of the sanctum 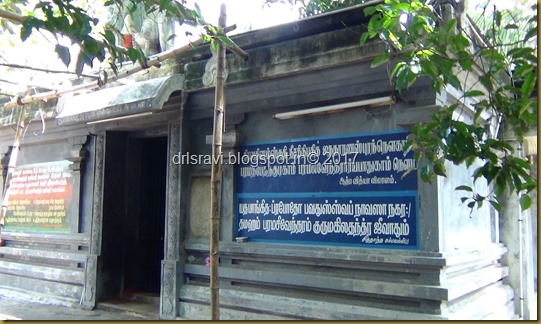 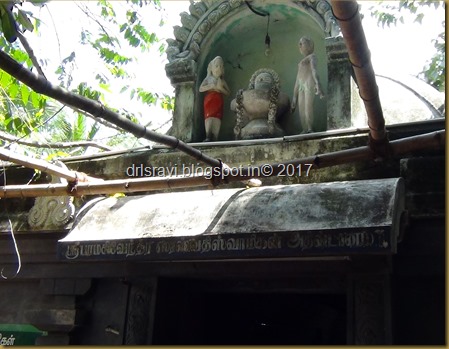 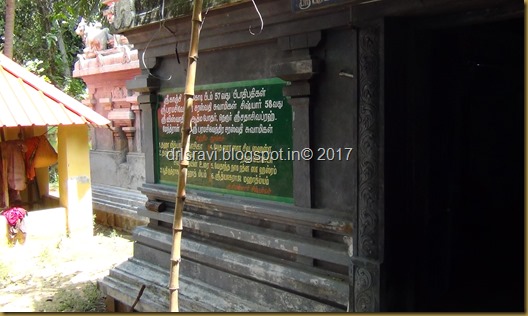 A truly memorable experience which i perceived in this second visitof mine
Contact: Sri Sivaramakrishnan::9488210744