LEGEND:
Once Brahma was starting a yagna and used Arani wood to start it. After the fire   water also started flowing and it came to be called as Arani River which flows into the bay of Bengal near pulicat.
Agastya consecrated five temples here on the banks of the Arani river and each was depicting one face/ aspect of Shiva . These are collectively called as the Pancha Brahma Kshetrams.
They are all in a 50 kms radius and can be visited in a day. Most of these temples are not having resources hence you may  find them closed  early.

Posted by drlsravi at 1:37 PM No comments: Links to this post

How to Reach:
The place is very easy to reach as it is just adjacent to the state highway.
I travelled on the Chennai Nellore highway and crossed Panjetti over bridge and the road to Siruvapuri was on the left. The next major road after this is the state highway to Uthukottai  I took a left here .This road goes to the centre of Arani and once you reach the market and main bus stand you are welcomed by the  Gopuram of the Sampangi Pitchaleshwarar temple 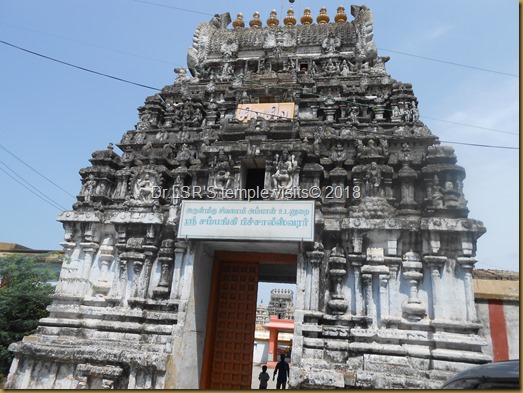 LEGENDS AND STORIES:
It represents the vama deva face of Shiva which encompass the protective nature of Shiva with water as the element and depicts the North face of Shiva. It emphasises Jnana as a means of enlightenment
There was a forest of champs flowers here where a cow was found to be emptying it's It were daily on clearing the space a Swayambu lingam was found. The chieftain injured the shivalinga am in remorse cut off his arms. His wife prayed to the Lord for her husbands arm to be given back as alms .Shiva  restored the arm and hence is known as Sampangi Pitchaleshwarar
The temple is quite old and is in dire need of resources and maintenance. I arrived at 10:30 on a Sunday and was lucky to be spotted by the priest who was closing the door and the Lord gave me darshan below is view from Rajagopuram 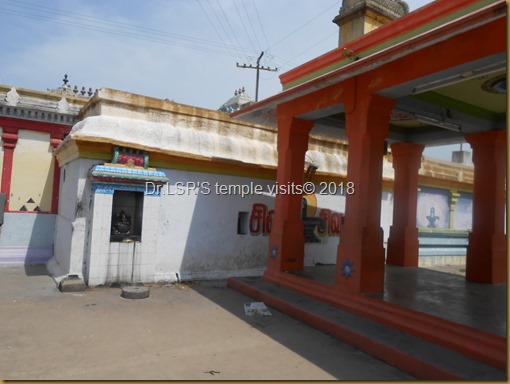 The temple is quite huge with an outer prahara with many sannidhis. You can see the gopuram of  both main sanctums here and the entrance is from west 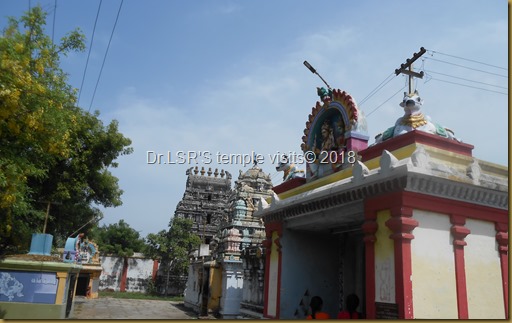 The inner sanctum has a South facing entrance and the outer hall has pillars with many sculptures. 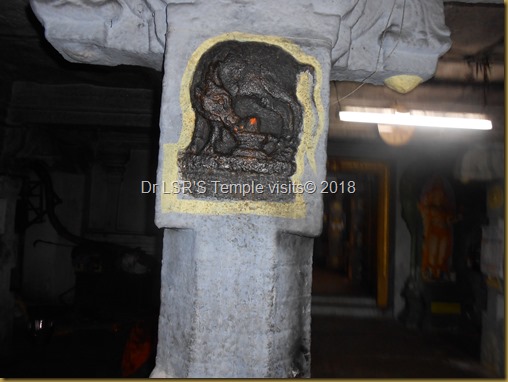 The inner hall has the east facing Lord with a Swayambu lingual which is clearly misshapen and not man made quite small and the avudiar (base) is square a common feature of lingam installed by Agastya. The outer courtyard has the following  Koshta  vigrahas and sannidhis 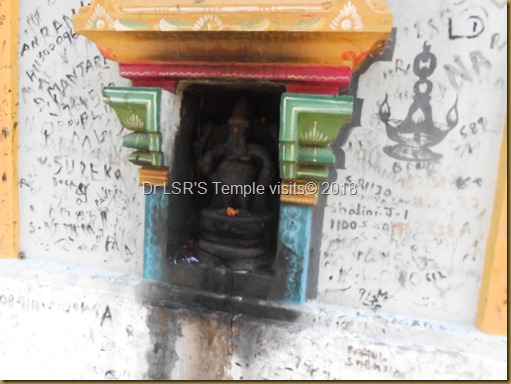 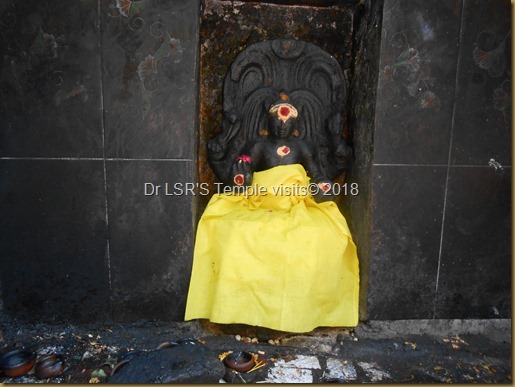 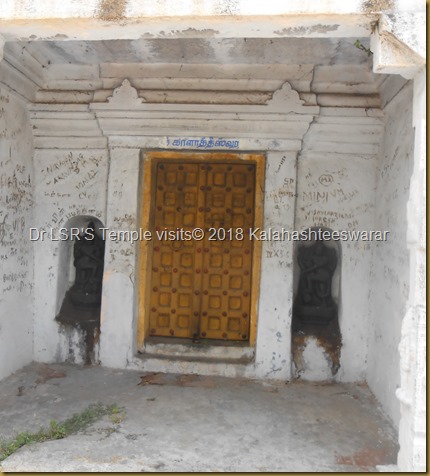 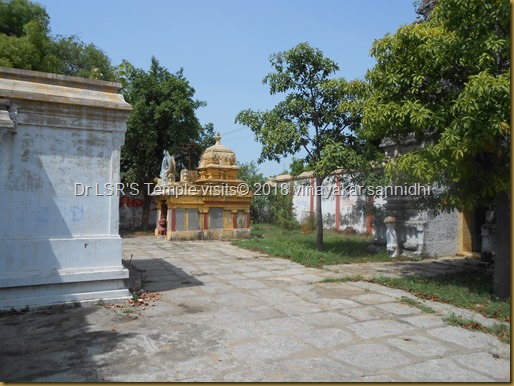 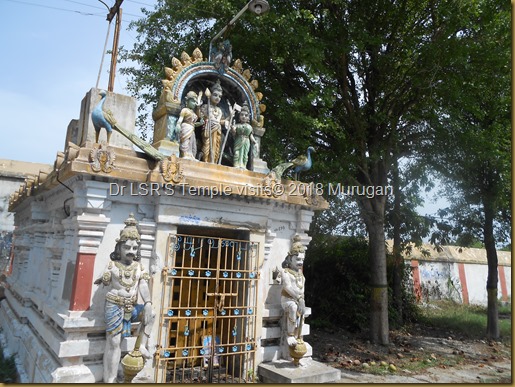 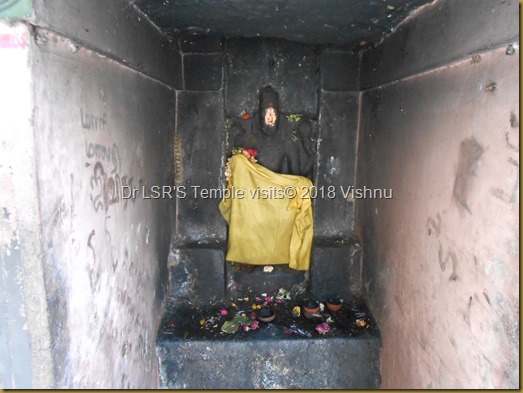 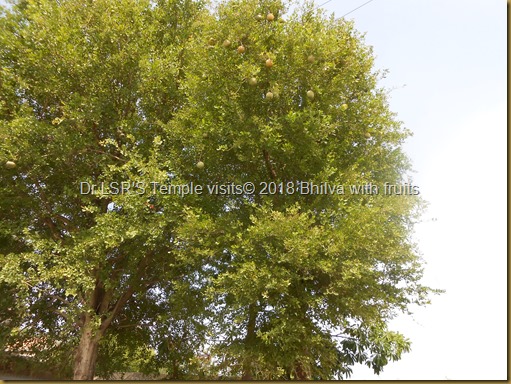 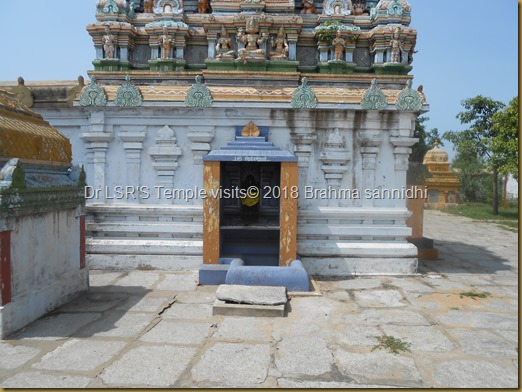 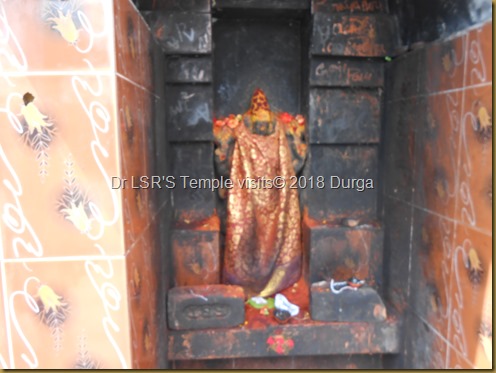 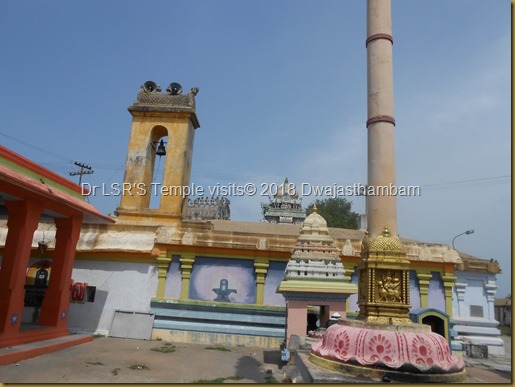 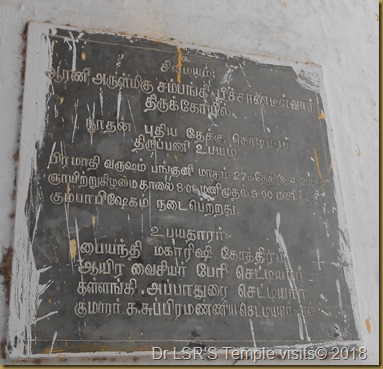 Posted by drlsravi at 1:23 PM No comments: Links to this post

I had wanted to visit the pancha brahma sthalams and had visited the Ramagiri and Suruttupalli temples .I now had the opportunity to visit this temple

The temple is about 40 kms away from Chennai and easy to reach by road. It is quite close to the Siruvapuri Balasubramnia swami temple and can be combined . On the GNT road I travelled via Padi and on crossing Panjetti, Ponneri at about 30 kms from Padi look for the Durga Poly technic school.The road exactly to the opposite side leads us to Ariyathurai.the place has many brick kilns and the temple is in the far end on the river bank 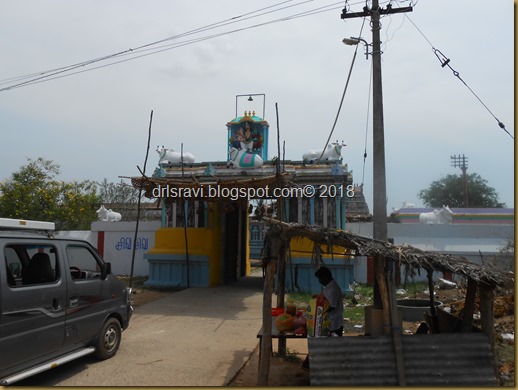 The temple is associated with Romarishi  and is one of the pancha brahma sthalams.

Sage Mukunthan was advised by Brahma to do penance here and he had the darshan of Shiva as Kala Bhairavar here.Actually Mukunthan wanted to go to Kasi but Romar advised him to worship here and he also had the flow of Ganga from a pit near the temple which is still flowing here and tis gives the place the same importance to Kasi

Kanchi Mahaswamigal  visited this place in 1965

Lord Krishna took permission from Indrani, plucked the parijatha tree from Indra loka and brought it but he did not ask the tree’s permission hence the Parijatha tree cursed Krishna to be born as a peepul tree and live for  a 1000 years here there are two huge peepul  trees ones behind the temple

King Chithrasenan was childless and Goddess Maragatha valli was born to him after  many years. When the King arranged swayamvaram for her, Lord Shiva whisked her away  on a  horse . The King’s army chased them but Nandhi stopped the army. Then Lord Shiva appeared with his consort in marriage pose to the King and informed him that the Goddess herself was born to him since he was childless. The Idols of the Kalyana Kolam here is beautiful

A chettiar who had his jewel shipment restored at Pazhaverkadu port  after a storm was informed to construct the Ambal sannidhi  and told the idol is lying in a pond nearby in his dream. The jeweller retrived the idol and built the sannidhi

Once a monkey was chased by a hunter fell into the ganga water and went around the peepul tree.It also witnessed the Pradhosha pooja here and was born again as  Raja Kunjara Chola of Kanchipuram who remembered his previous birth and constructed this temple here

As you enter the raja gopuram there is a large Kalyana mandapam on the left and the main temple is in front. 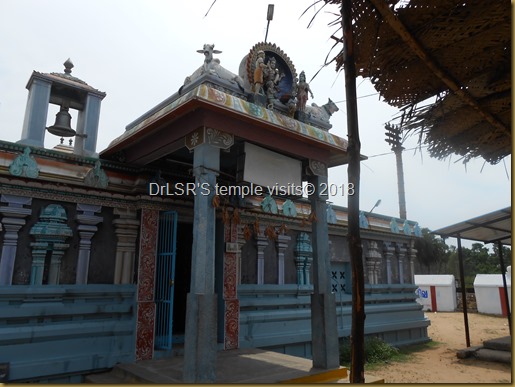 The entrance is south facing and you will see the Ambal Maragatha valli  sannidhi in font and the Sivan sannidhi to the left. 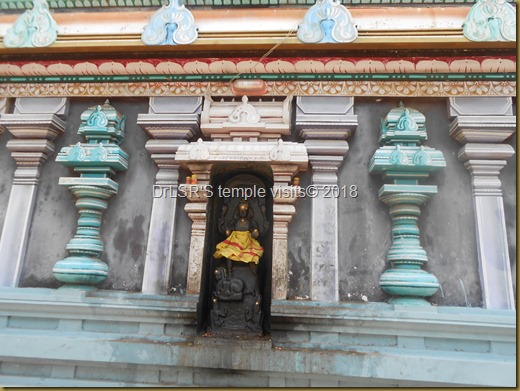 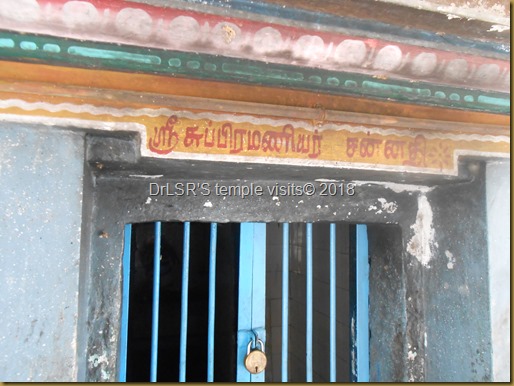 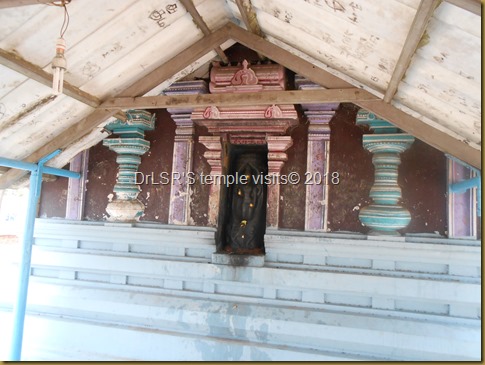 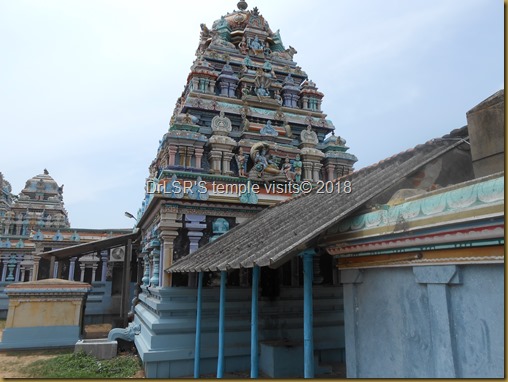 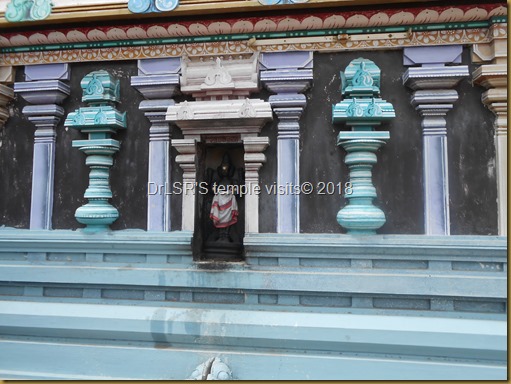 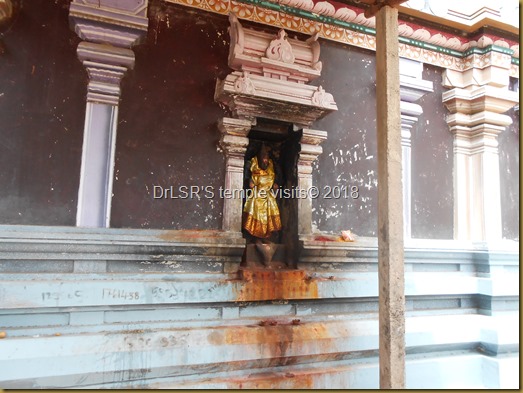 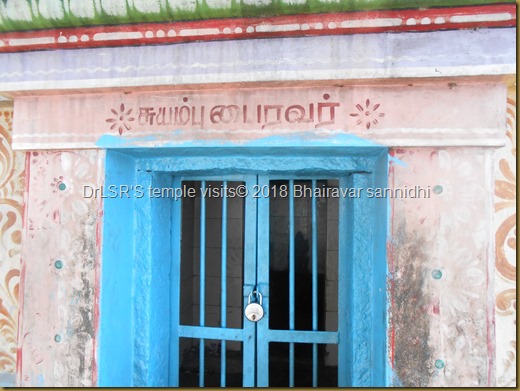 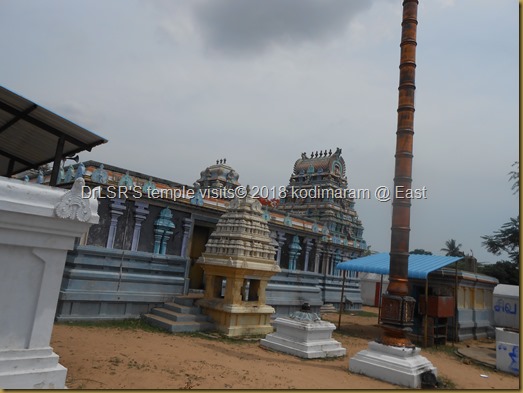 The house is seen on the right 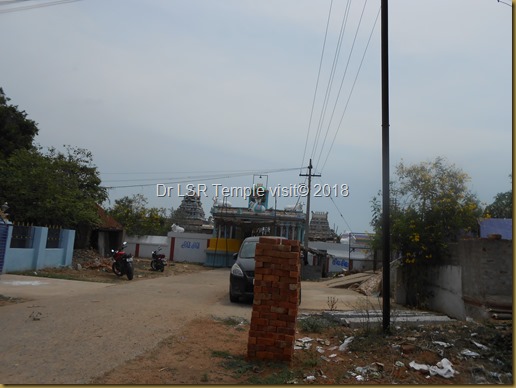 Posted by drlsravi at 7:49 AM No comments: Links to this post