This is one of the Divya desam in and around trichy.The Temple is supposedly built by Sibi chakravarthy and the other name for this is swetha varaha puram. Thetemple is huge around 10 acres and the structure is mammoth. The place abounds in white granite hence vellarai. The temple  is supposedly more than 64yugas old. the present structure is traceable to Mahendra pallava and to later Cholas and Krishnadevaraya too. There are seven theerthams within the temple complex and it is believed that Ramanujacharya has lived here for some time. Manavalamamuni and Desikar have sung of this great shrine.

From trichy take the salem road and in 10 kms you will reach a right turn which leads to  Manachanallur in another 20 kms. From here head north west for 6 kms and you will come across the huge unfinished rajagopuram which is mammoth 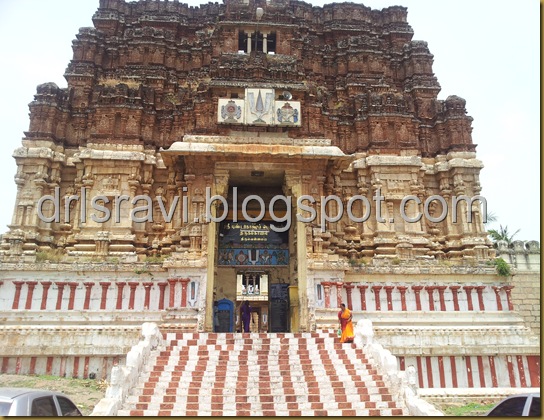 Considered to be older than Srirangam, it is also known as
Swethagiri, Adhivellarai, Uthama Kshethram and Hita Kshethram.
According to the Puranas, 64 `Chathuryugas’ (the present Kaliyuga
being one among them) have passed since the Lord was enshrined here
and the temple was built by Emperor Sibi.

Bhoomidevi and Sage Markandeya were among those who worshipped the
Lord here. Sibi brought 3,700 families of Srivaishnavite Brahmins
from the banks of the Ganga and Yamuna and settled them here as per
the advice of Sage Markandeya. When one of them passed away, the
emperor was perturbed but the Lord told him that He would take the
place of the 3,700th Brahmin.

According to another legend, the emperor, before he built the
temple, one day saw a white boar (Swedha Varaham) in the forest and
chased it. It hid itself in an anthill near the place where Sage
Markandeya was doing penance. When he enquired the sage about the
boar he asked him to pour milk over the anthill to find it.

He did so and found the massive idol of the Lord in its present form
emerge from it. The Lord told the emperor to build a temple there.
This was said to have happened millions of years ago.

The Goddess in this holy place is known by the beautiful names of
Pankaya Selvi and Shenbagavalli. According to legend She did penance
here for union with the Lord, who appeared as Krishna from a well
known as `Poonkinaru,’ long before the Lord took the incarnation as
Devaki’s son in Mathura. That seems to be the reason for Saint
Periyazhwar addressing the Lord here as child Krishna. Assuming the
role of Yasodha, he appeals to the Lord to allow Him to apply
`Kaappu’ on Him.

In ten poems, he portrays the childish pranks of Lord Krishna. But
for Thirumangai Azhwar the Lord here is the one who took
incarnations as Parasurama, Rama, Krishna, Narasimha, Varaha and
Koorma. He also refers to the Lord taking the form of Hamsa and
Parimuka Perumal (Hayagriva), which are not so well known. He has
also sung the glory of the Lord in his `Siriya Thirumadal’ and
`Periya Thirumadal.’ Both the saints have dedicated to the Lord 24
Pasurams.

There are massive walls and praharams. When you enter the rajagopuram you come to the swasthika well at present repairs are taking place and there is no water here. 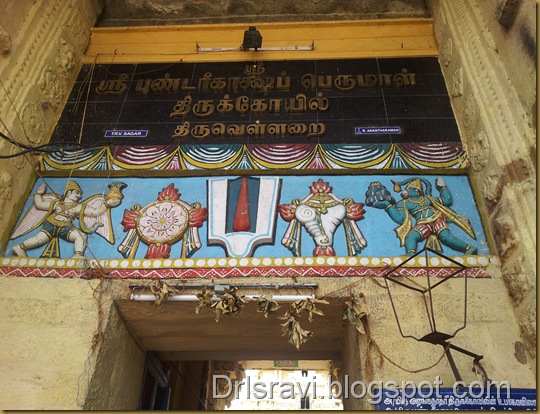 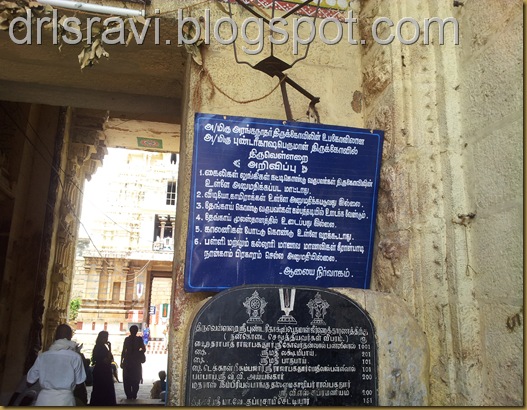 The next gopuram leads us to the praharam with Anjeneya, Thayar complex,,chakrathalwar,and the two doors to the sanctum which are called uttharayana and dakshinayana entrances 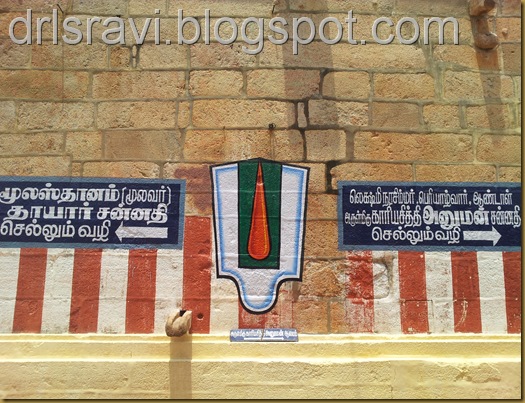 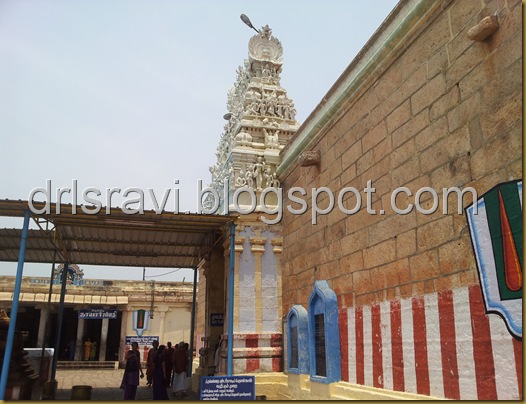 The devotee has to pass 18 steps first representing the 18 chapters of Bhagwat Gita. The next 4 steps at the Gopuram-tower entrance represent the four Vedas. After worshipping at the Bali Peeta there are 5 steps representing the five Bhoothas-space, water, fire, wind and earth. There are two entrances to the sanctum sanctorum, the Dakshinayana entrance open from Aadi to Margazhi Tamil months covering from July-August to December-January and the second Utharayana open from the Tamil months Thai to Aani covering January-February to June-July. 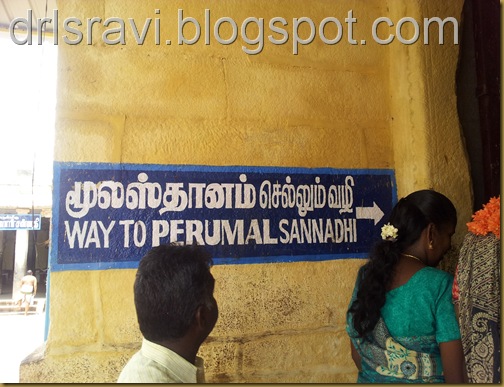 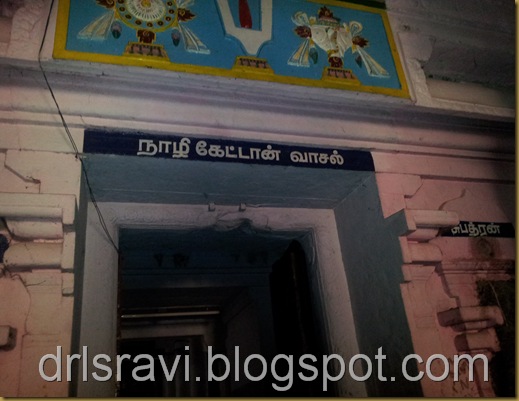 The thayar is the powerful leader in this house. This is the Naazhi kettan vasal where  she reprimands perumal after he arrives late. In fact during kalyana utsavam the thayar remains seated and only the lord stands up to tie the thali here. This is due to a boon Lakshmi devi obtains from Vishnu during the churning of the Milky ocean.

The presiding deity is Pundareekakshan in a standing posture You can see Garudan and Adiseshan on either side standing as pilgrims.Below them you can see markandeyar and Sridevi facing the lord on each side and you can see Suryan and Chandran above waving the chamaras

A word of caution here the archakas are very forceful in getting your “Voluntary contribution” to the daily needs of the temple .

The Praharam also has the Chakrathalwar and hanuman sannidhi. The hanuman here is very powerful and prayers to him cost 200 for curd rice prasadam, 500 for a vadamalai .The eyes of Hanumar are very appealing and appear shining to entice you 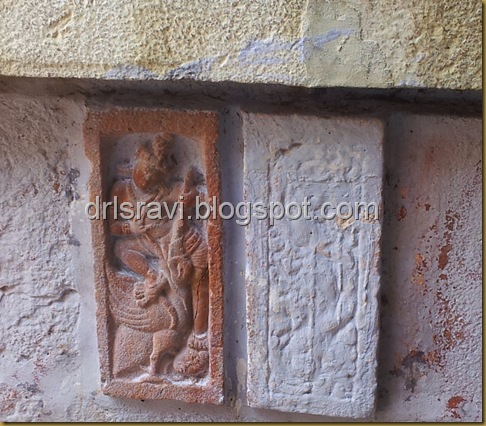 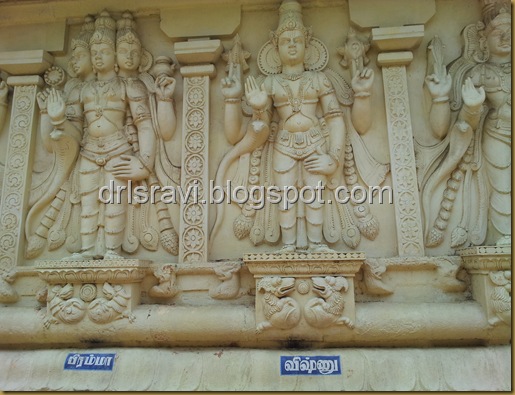 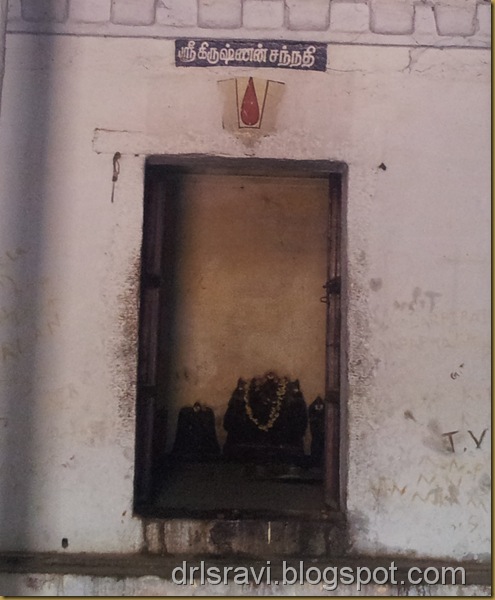 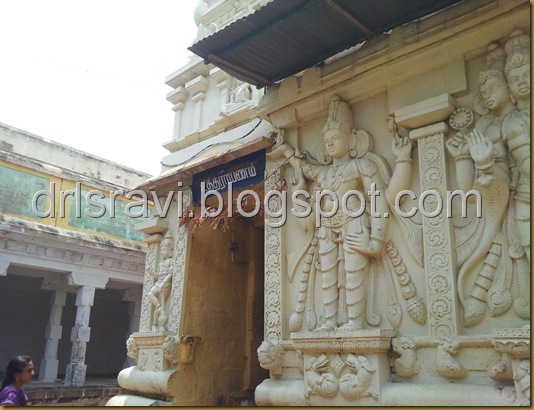 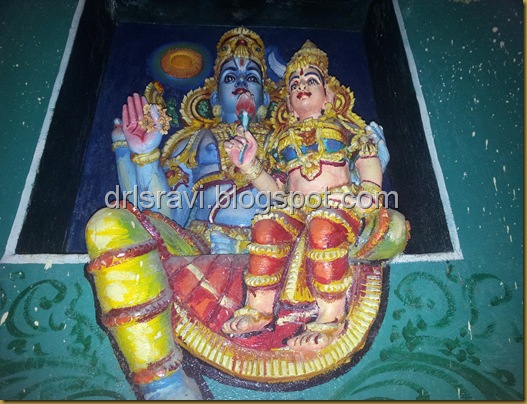